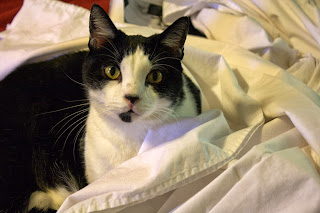 We currently have three pets (and aren't looking for any more!): A large brown lab/shepherd mutt, a slightly smaller shorthair theoretically purebred border collie, and a black and white (tuxedo) cat.

We adopted the cat by accident in 2004; we already had two young cats and weren't looking for more. One day we heard a kitten meowing outside. This ultra pathetic meowing went on longer than we could possibly ignore, so we went out and found him cowering under some bushes all alone. We brought him inside, introduced them to our cats, who hissed and howled at him, and gave him a bath where thousands of fleas jumped off of his face.  He was adorable, with a perfect triangle on his nose and a perfect heart on his back. Both of those would distort a bit with time. We planned to clean him up and take care of him until we could find him a home. This continued to be our plan for a couple of weeks. We were careful not to name him, because then we'd be attached. However, there was an unspoken agreement about what his name would be, if he were ours. We'd take him around with us to the college campus, show him off and hope that someone would take him home. We'd let him play in a large soccer field and he'd follow us as we walked around the track. Then I started to notice that our cats were being a bit friendlier to him; I even caught one grooming him on the sly.  One day we were laying down cuddling this kitten when C. picked him up and made him do a little dance to this tune:

We had both had little Gavroche in mind from the beginning with this kitten, since we had recently listened to the soundtrack on repeat for a long car ride.  I mock chided Lord Covington: "Oh no! You did it! You said the name! Now we have to keep him!"
After that point he belonged to us, but it was a little longer before he decided we belonged to him. That happened on a sunny lawn while we waited for C. to get out of work. Little Gavroche crawled up to my neck and started nuzzling and purring, and began to try to nurse and knead on my neck. He would continue to do this for many years, to myself and others, even to our frustration.

In the musical Gavroche likens himself to a pup. So why not save that name for a puppy? you might ask. At that time we weren't sure we'd ever get a puppy, but really we were only about three years away.

In October 2006 we started looking for a puppy. We were living in Midland and checked out the pound and the SPCA shelter. We looked at several puppies, and though they were all adorable, they weren't all right for us.  One little puppy got so scared he peed all over me when I tried to pick him up. One little puppy would not stop jumping on me or sit still for a moment when I tried to hold him.  One little brown puppy came up to me and let me pet her. She let me pull her into my lap and she didn't run away, or jump and lick my face. We decided she was just right for us. We had both been reading Stephen King's  The Dark Tower, and C. had been reading Siddhartha.  In one, Kamala is a dance for crop fertility, and in the other it is Siddhartha's consort and the Hindu word for lotus. We decided this was the perfect name for our little loving-prancing balanced puppy.

When I first awakened from my car-wreck related coma in 2007, it was to my father discussing the possibility of me needing a helper dog with a nurse. My dad adamantly denies that this conversation took place, but my mind was made up, I needed another puppy. In April 2008, we were searching for one. We had actually adopted a second puppy after Kamala, but Skyler had distemper and had to be put down after we'd only had him for three weeks.  Since we had so recently been burned by a pound adoption gone bad, and since we hadn't had the best of luck with our first pound adoption of Kamala, we decided to go another route. (Disposition-wise Kamala was wonderful, but had mange and cost us hundreds in vet bills to get her healthy.) I wanted just the slightest bit more assurance of a healthy puppy. We ended up going for a 'purebred' border collie.  We took our time coming up with a name for him, and eventually decided that Morpheus would be fitting.  Morpheus is the Greek god of sleep, and the god of dreams in Neil Gaiman's The Sandman comics. In addition, it is where the name morphine is derived from. Since the impetus to get this puppy came out of my coma-drug addled brain, we decided that was what we were going to stick with.

Those are our furry family members. They all love every person they've ever met. Gavroche will still follow us around as we walk the dogs. He will modulate his meow to sound more pathetic when asking for breakfast. Kamala acts a bit grouchy and old but will run in happy figure eights when she gets excited. She yodels more than she barks. Morpheus will run right over you if you are between him and his ball. He is jealous of any amount of attention paid to anyone not him, but he will fiercely protect us when it is necessary.  Their names are strange but their hearts are loving; they are ours and we are theirs.

Posted by Lady Covington at 6:59 PM