By Lady Covington, {additions by Lord Covington as so} 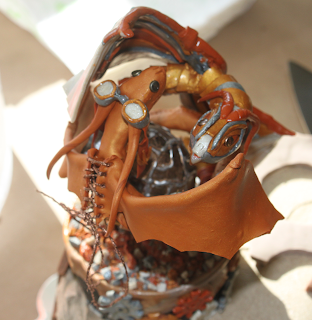 We recently shared that the 21st was our second Wedding Anniversary. We wanted to share a little more about our wedding.  I absolutely loved all of our vendors and would highly recommend them. None of the below endorsements are paid in any way. : )
DIY/Custom Elements:
Shortly after getting engaged, we decided on steampunk and started brainstorming other details.  We wanted an outdoors wedding, preferably in Austin so we could get good vegan catering. While we tried to iron out these issues, I began working on the Do-It-Yourself elements:

My favorite element was the dragon cake topper pictured above. I made it out of Sculpey clay. It was one of the first things I started working on, and I had so little extra money to put towards things that I made fake gears because I couldn't afford real ones! I must have finished it before March 2011, because I went back and added the egg in the middle when we found out we were expecting.
Most of my DIY time was spent working on the invitations. I think I started cutting the books out about a year and a half before our wedding date.


I didn't have any fancy tools, these were cut a bit at a time with a utility knife. They aren't the cleanest cuts, so the next step was lining them with satin fabric.

Once I had the 'envelope' I moved on to the invitations. I made them tri-fold, and though I didn't have the best designing experience, I had fun creating it and downloading tons of free fonts to liven it up. I included information on dressing steampunk, and let everyone know we didn't require it!

I carved all of the stamps on the invitations too; I was pretty happy with them because I'd never done carving before. (Actually, I think I did one thing in 10th grade art) I think all of our friends ended up getting stamps for Christmas 2010. : )

The next DIY elements were for the wedding party. I researched all sorts of paper flowers and wanted to make them as lifelike as possible. I started making the paper flowers with a certain pattern requiring adding one petal at a time. It was a complete pain. I put hours and hours into it and ended up with roughly enough for  one bouquet. I also couldn't get nice looking tiny roses for the boutonnieres. So, I came across another technique, modified it slightly and loved the results. I ended up making all the bridesmaids bouquets using this new technique, as well as my throwing bouquet, tiny roses for the boutonnieres, and extra roses for table confetti. I actually wish I'd made an extra bouquet this way for myself, I love the way they turned out.

Our photographer was 4eyez Photography. Most of the photos I'm posting here were taken by them.They were wonderful, and they travelled almost four hours from around Dallas to be at our venue by something like 9am. They are a super-friendly husband and wife team named John and Pam who seem to genuinely enjoy their work. Pam helped me arrange my DIY things to take the best pictures of them. They just made the top 32 photographers in Dallas, and they are willing to travel, so if you're in need of event photography, give them a look!

I designed the boutonnieres, after several different attempts. I had trouble getting the right size of watch springs, including accidentally ordering grandfather clock springs at one point!  I made the fascinators for all of the bridesmaids and myself, and I attached mine to my mini tophap, as shown. I did not make the top hat, it was a last-minute custom order from Gypsy Lady Hats where shipping was slightly delayed. It actually arrived the morning of the wedding and was rushed to the venue by one of my bridesmaids! I ordered from their Etsy site. I'd highly recommend them if you're looking for a hat, they have great products!

Other Etsy shops we purchased from were:
Bandscapes for our wedding rings.
Velvetmechanism for my corset/harness.
ZenAndCoffee for my pretty glovelets.
We also purchased typewriter key rings and money clips (I think off of Etsy, but can't find the shop!)
Lord C's vest and my shrug were also Etsy finds; the shop is currently closed as the owner is pursuing other interests.

We were both set on an outdoor venue from the very beginning. Originally we had planned to have our wedding in Austin. We were living in Corpus Christi, but wanted something closer to my half of the family in west Texas. We took a couple weekend trips, checking out the botanical gardens and lots of parks, as well as some bed and breakfasts. On one of our trips we took a detour through San Antonio, and were surprised to discover that we loved it as a venue city even more than Austin! We decided on a venue and found a possible pastor around February 2011. Things were closing in on being planned when we found out we were expecting. Our due date was December 3rd, and our planned wedding date was November 11th. Shortly thereafter we found out we were going to be moved to a new hotel! A new city, new jobs, and a wedding were now all in the works for the six months before we had a baby!

My bridesmaids were willing to help me with getting things ready, even from afar. They made signs directing people at the signing table to share the 'key to a happy marriage', a metal tree to hang tagged keys from, signs with an expanded version of this quote for in front of the (Vegan) food tables, and white knot signs listing the federal rights currently denied same sex couples. One of the bridesmaids and a couple of the groomsmen also helped download and set up a playlist for, and run the music to, the ceremony and reception. They were integral to us being able to have everything ready by our deadline with our new responsibilities at work and our preparing for a baby.
We completed the move, and started looking for a venue a bit closer to our new home. We found the perfect place closer than we could have imagined: The Star of Texas Bed and Breakfast. Don and Debbie were wonderfully friendly, willing to prepare a vegan breakfast for us, and they would have dressed to theme if they had known about it. Their venue is much more expensive than we had originally planned, but I would still consider it a good value, especially since they provide extras with the service of being a venue including Don being a minister and Debbie taking photos of the ceremony.   (We choose to have a different minister, and didn't know they'd be there, or we would have mentioned the theme!)

We chose a minister who was someone we knew: Our previous boss! He was a person of faith, important to Lord Covington, incredibly liberal, important to both of us, and willing to go along with our weird ceremony ideas and adlib when necessary. And he did a wonderful job dressing up! 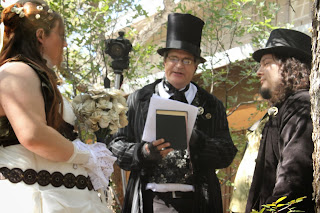 The ceremony: We entered to Depeche Mode 'Somebody" {Somebody became our song almost immediately after getting together.  We were sitting in our room, listening to a random tape lady C. had.  As the song played, we both realized that our fledgling relationship was the one described in the song. This was a powerfully emotional experience for both of us, and an unspoken agreement was made on the spot}   and left to Metallica's "Nothing Else Matters."  We had a small altar for a 'joining of fire' demonstration. All of the sticks were brought by the groomsmen, bridesmaids, and family. They symbolized how our love was fed by the support of our friends and family members, and they came from all over, but mostly from places we had lived together.

There were a ton of high points to that day, but one I was absolutely not expecting was when I started down the stairs after the bridesmaids, there was an area where I was looking through the treetops and had a view of just about every single one of our guests. I could not see a single person who had not put effort into dressing to theme. It is hard to put into words the emotional affect this had on me. These people drove anywhere from 3-6 hours to be here, just to watch us make some pretty speeches and sign a paper. They were sitting in the Texas summer heat in tophats and overcoats, and it made me feel strongly that they just weren't there to watch us, but that they were participants. Our friends and family were part of our lives, part of our story, and very much a part of this beautiful day. 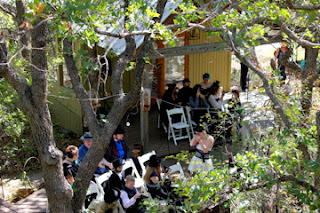 Afterwards, everyone headed back to the hotel for the reception and yummy food.  I would be amiss in not mentioning another major vendor we used, Green Vegetarian Restaurant, who brought wonderful vegan food from 3.5 hours away, including three types of cake and cookies for decorating! I was so thankful they were still willing to be our caterer after we moved our venue from their backyard to so far away, I can't recommend them enough and I would use them again in a heartbeat! If you are ever in San Antonio, you should stop by and try their food!
Posted by Lady Covington at 12:30 PM