Redefining yourself: Words and Image.

I am a big proponent of redefining yourself.

Sometimes it is about what is in a name: Choosing our own last name was one major way Lord Covington defined each other by our own expectations rather than those of society.  For the past several years I have gone by a unique shortening of my first name (like Topher instead of Christopher). Instead of Kimberly, I go by Imber. People tend to remember it, which is useful for meet and greets for work, and I hope eventually in the art world, if my work ever gets off of the ground.  There are tons of people who still use my full name, and I don't reject it, I just don't feel like it is 'me' as much as Imber is, in the same way 12 year old me is still me, just not the most current and accurate incarnation.

It wasn't the first time I had changed an aspect of myself. Growing up, I never felt very feminine. Not in the 'I'm a tomboy and don't care about that stuff' sort of way, (though I'm sure I was a bit of a tomboy), but more in the "I'd like to be pretty and wear dresses and makeup but that's just not me, I'm not one of the pretty girls" type of way.  I don't think I ever wore a skirt before leaving home to UNT. I fell in love with the gypsy/hippie long skirt look, and began wearing long skirts and peasant blouses. I even occasionally threw in a short skirt, if it was for a costume event.

Somewhere along the way, I decided pants were for suckers and avoided wearing them whenever possible. When given the opportunity to wear a uniform skirt for work, I did so, even though the tannish color was terrible. I wore knee length socks with them, which, thinking back on it, was probably not the best look, but heaven forbid I actually show my pasty flesh.  In those days I still spent a lot of time in pajama pants out of work, and several hours a day for each of us was spent in a Taekwondo gi.  When Lord Covington took the position in Corpus Christi, I checked outlets and thrift stores and upgraded my wardrobe to a couple cute skirt suits, a few miscellaneous skirts, and some pantyhose. Adding to my normal body image issues was the fact that the major wreck we had had happened about a year before our move, and I had a massive scar on one knee. So yep, I would still not be showing off leg skin. 103 degree, humid bay weather, and I was in black hose.

This would continue until I was pregnant with Toddlesworth. Amongst all of the scare inducing pregnancy horror reading was a line about varicose veins. I suddenly realized that my scar wasn't that bad. I decided I would take advantage of this time during my pregnancy to wear cute maternity dresses and avoid the pantyhose and restricting clothing.  I have a much expanded work wardrobe now. It is a good thing I found some more comfortable things to wear, since work and home life are so intertwined, I have to wear work clothes every day. It turns out that I really enjoyed wearing dresses and feeling cute. The only thing stopping me from doing so before were my body issues and self doubt.

I would not say I love my body. It could definitely be improved. However, I now feel that that should not keep me from feeling good in it. If I want to wear pretty dresses, I shall! I finally bought one of he adorable dresses I'd been eyeing off of ModCloth, and wore it to an art event.  Now I just have to figure out more excuses to wear it.  My next step is to learn to style my hair. I want to learn how to put it up in victory rolls, but beyond never doing anything more complicated than pony tails or buns, I'm facing the challenges of fine and flat hair. I'm attempting it every few days, and making a bit of progress. 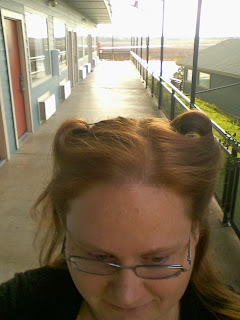 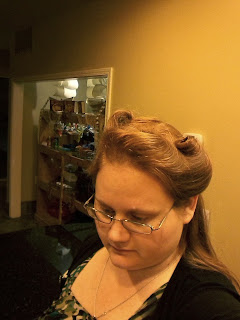 Have you ever redefined yourself, in small or large ways?

As an addendum: A friend recently gathered some resources for plus sized ladies to find pretty clothes. I'd like to share them here for anyone who might find them useful.
www.igigi.com
Torrid
Ashley Stewart
Lane Bryant
S.W.A.K. Designs
Pinup Girl Clothing
forever21
www.zulily.com (You will have to make an account)
Posted by Lady Covington at 8:45 AM