By Both of Us, Switch offs notated by (Lord) and (Lady)

(Lord) Little Lord Toddlesworth was led to a broken old wooden latticed door covered in caution tape.  "Zombies": read the caution tape, " Keep out":  It was just as he suspected.  "Sarey Som-bies" were indeed present.  The Intrepid Toddler knew his lead was correct.  Gingerly he pushed the cracking door open.  Inside, hanging plastic obscured his entryway.   Tables and chairs were scattered across his pathway, making for only one narrow entrance.  A thick fog pushed its way toward him. "Indoor Fog? What the deuce?', he wondered.  Somewhere beyond the fog, he could hear children weeping...    His first instinct was that he wanted none of this: that he should return from whence he came immediately.  Steeling his courage, and as if guided by an invisible hand, he pressed on into the darkness...

This, more or less, is the experience I hope that Toddlesworth had upon entering the room for his 2nd birthday party.  As he has been obsessed with zombies over the last few months, we thought it best to have this theme for the party.

The party food was elaborate and lovely. 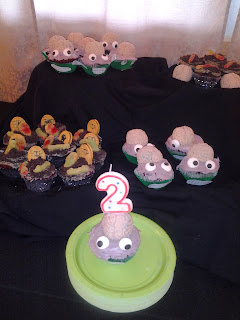 (Lady) The cupcakes were many. There were undead arms and heads made of almond paste peeking up through crumbled cookie dirt, in front of nutter-butter tombstones. 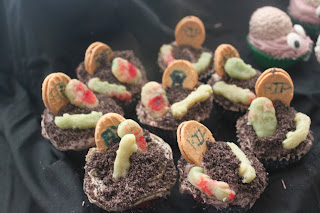 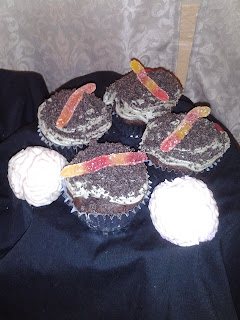 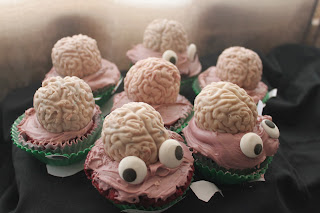 Vacant eyes stared from cupcake zombies, complete with vegan white chocolate brains, filled with cream cheese icing. The non-gluten free cupcakes were red velevet, and about half of the cupcakes were filled with a delicious gooey strawberry filling. 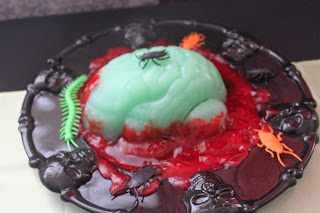 An agar-agar (vegan jello) brain sat atop a bloody platter, crawling with bugs. 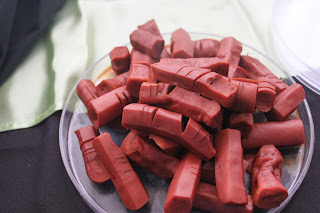 For savory food, there were severed fingers made from boiled (vegan) hot dogs. They aren't as round as regular hot dogs, but they turned out alright. I meant to include ketchup blood but time got away from me.
There was also a delicious pan of "guts with extra eyeballs" made from phyllo dough, laid end to end, wrapped around meat and cheese, and arranged in the pan to resemble intestines. A can of olives was added on top, for eyeballs. And you know, because olives are delicious. Toddlesworth liked the result quite a lot and referred to it as pizza. 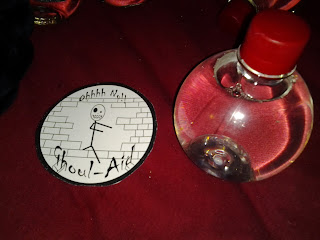 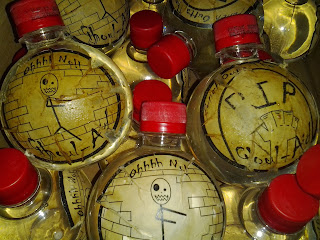 For imbibements, I created "Punch Outta The Grave" and "Oh nooo!" labels for "Ghoul Aid" brand drinks, wrapped around flavored water that once featured spiderman. I cut them out, stuck them on, and aged them with coffee.  There was also punch, made from ginger ale and blended frozen lemon bars, as I could not find vegan lime sherbert/sorbet in this town for the life of me.  I threw glow sticks in the punch and the bottle display, but the room wasn't quite dark enough for them to have their intended affect. 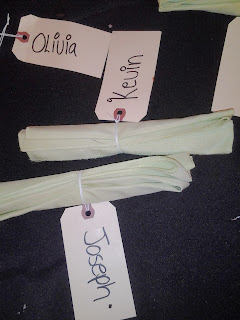 Places at the table were marked with toe tags. 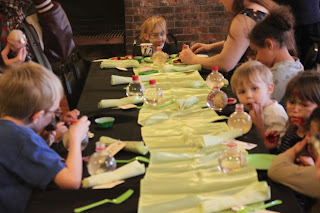 Birthday boy sat at the head of the table where he could admire all of the sawey sombies that graced the cups. 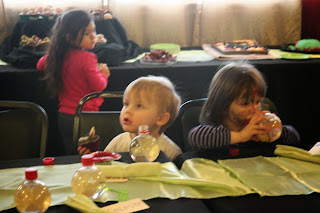 (tiny view of the pan of guts top right) 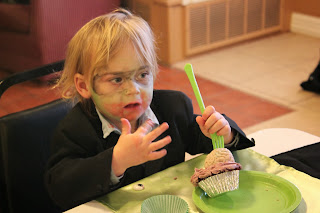 Even the "2" candle did not survive the festivities unscathed, as Toddlesworth blew it out like a pro, and then picked it up and bit the bottom off. 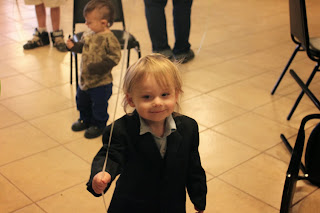 Toddlesworth had very recently discovered a love of balloons. He was happy to see so many of his newfound objects of interest. 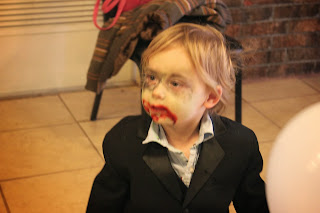 (Lord)  We made sure he was ready to join the ranks of the undead before zombifying him. 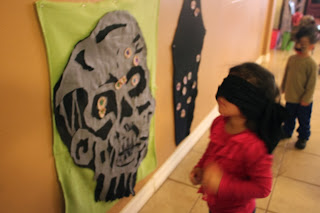 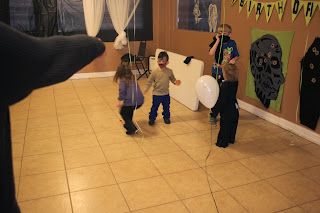 Our party games were riffs on traditional children's party game with (every possible pun intended) a zombie skin.  The first was "Pin the Eyeball on the Zombie".  Lady Covington sketched  a zombie on felt using two layers, black and grey.  We then cut it out until it looked rather impressive for hand drawn and cut.  The eyeballs were crafted out of similar felt, and then drawn in with sharpies. The blindfolds didn't have as much thought put into them.  The first child, after being blindfolded and spun around multiple times, placed the eyeballs perfectly, as evidenced above.  No amount of altering spinning or blindfold  cloth could stop their fearsome accuracy.  Ah well, we're pretty sure every child had a good time. 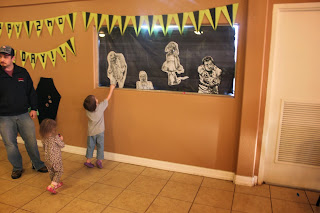 Our other game went over better.  But it's hard to mess up "Throw Darts at the Unmoving Undead Trapped on the Wall"  The winner is pictured above.
The party favor bags included the darts used to throw at the window zombies, a gooey eyeball, a noisemaker, to lure undead away from your friends, a 'create a zombie graveyard' sticker set, and a bag with a few gummi worms. They were also supposed to include some zombie children cartoon stickers, but they did not arrive in time to be included. 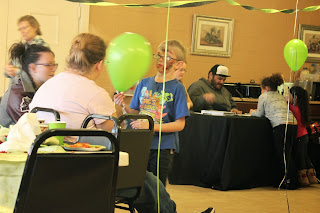 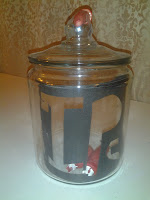 Pictured is a unique local artist, Tommy Munster, was willing to create custom sketches of whatever the hordes of children requested .  To his credit, he remained good natured, no matter what absurd demands where thrown his way. He even went so far as to sketch on balloons, much to Toddlesworth's joy.  Check out his work at https://www.facebook.com/munsterart 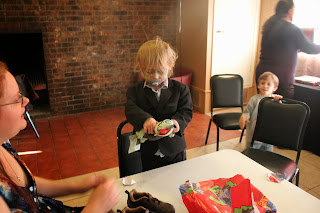 While Toddlesworth was content to open his presents, we aren't entirely sure he knew this event was for him.  He was calm about the whole thing, but not excited.  He did notice, eventually, that he was the only one opening presents.  He quickly added "presents" to his vocabulary in time for Christmas. 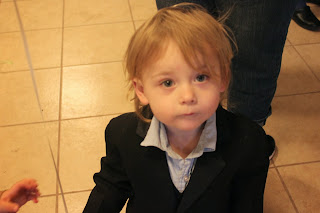 For all the complete change of schedule, Toddlesworth remained in good spirits throughout the entire soiree.  He honestly seemed to want to make sure everyone else was having a good time.  He walked from one group of children to another, interacting here and there.  I felt like he needed a tiny baby martini. 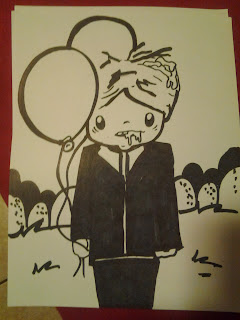 (Lady) To conclude, some may think this was too elaborate for a toddlers birthday, but I would consider it an achievement if this were memorable enough to him for it to be one of his earliest memories. I hope to fill his childhood with many more warm and unique memories. And maybe a few more zombies.

Posted by The Covingtons at 6:30 AM