An Introduction to Our Atypical Home and Life, part two: Work.

A couple months ago we introduced you to our living space.. Now it is time for a glimpse into the work side of our work/life balance. This post is still Toddlesworth picture-heavy, because he is a bit more photogenic than all the spreadsheets I've made.

There are several ways in which our work life is atypical. A major one is that we work together. This is not something most couples are able to do, even if they wanted to.  We have worked together since 2003, but the actual jobs we did were fairly normal. In 2006, we moved to Midland.  Lord C. got a temporary job as a night shift postal worker, and after some looking, I got a job as a front desk clerk at a hotel. About six months later, his temp work came to an end and he joined me at the hotel working the overnight shift. Our jobs themselves have been fairly unusual since 2009. At the end of 2008, Lord C. had been night manager for a year. I had been front desk manager up until the car wreck in 2007. Afterwards I took some time off to recover, came back for a bit, and realized I needed to take more time off. Very early in January, Lord C was offered the position of General manager in Corpus Christi and I went with him as a desk clerk.

I worked my way up again from there, to a pseudo front desk manager/accountant/fill in night auditor role. For a short time near the end of our stay there, we were looking to fill in a food service position, and I found just about the limits of my abilities when I was routinely working an overnight-double shift once a week and helping out with breakfast and dinner setup most days. As tiring as it was for me, I know it was even moreso for him! We found out we were expecting in early March 2011, and started planning on how we were going to be changing our lives, but we weren't prepared for the extent of the changes.

Later in March, we were offered management positions at the newly purchased property in Brownwood. We jumped at the opportunity, even though it meant leaving a few friends we had managed to make and our midwife that we lived three blocks away from.

This latest property has been the most atypical of them all. We weren't there for the remodeling portion of the redo, or installing the major furniture pieces, but all of the smaller pieces we handled finding the best deals and ordering, from the ironing boards to the phones to the little signs that say put your towels on the rack to reuse. I even got to design the pens, stationary, and business cards for the hotel (using a previously created logo for the property.) We interviewed and hired all staff, and they have been great workers and genuinely good people. Once we got up and running, the two of us cover management, accounting, and sales roles for the hotel. In addition to covering anywhere from a few to most day shifts during any given week, we cover the overnight position staying up late for groups in our meeting rooms that are night owls and waking up for calls from 4 am walk-ins, which happen more often than you would think! We do all of the shopping for the hotel, almost always with Toddlesworth in tow.

By far, the most atypical aspect of our work life was being able to bring Toddlesworth to work with us every day for the first 18 months or so of his life. He took meals on my lap while I worked on spreadsheets. He napped in a bassinet in the corner, and later directly on us, while we continued to work. We dressed him up and took him to work functions, after hours, ribbon cuttings, he mingled with guests in the lobby at breakfast time and greeted each of our groups with a smile.  Eventually, we ended up dressing him in a suit almost every day, leading to his nickname.
And here are some of the aforementioned pictures. We aren't always smiling in these, because they are taken in the midst of "real life" rather than posed sessions... Sometimes we were working 14 hour days, and often most of those hours were with a baby. While I loved having my baby with me at work, and wouldn't have changed it for the world, there is no question it was super exhausting.
﻿
﻿
﻿﻿﻿﻿﻿ 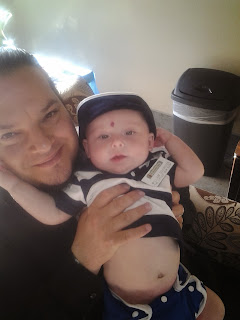 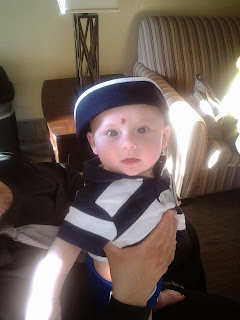 These were taken at our after hours, we had a marine theme going on, and put Toddles in as close to a sailors outfit as we could muster. He was a hit with all of our guests! 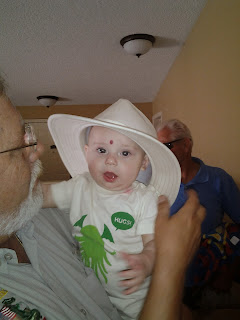 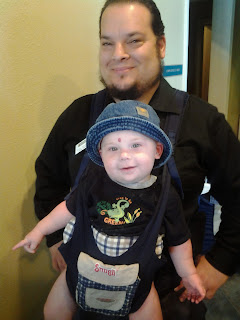 Toddlesworth still joins us fairly often, but his days are largely spent in the care of a friend.  Sometimes we have to do fill-in housekeeping while wearing a baby, and sometimes we have a tiny helper doing maintenance chores. (Toddlesworth will attempt to help me fix locks in room doors, make keys at the front desk, and loves trying to help Lord Covington vacuum the pool.)
It is strange to realize these videos were taken all the way back in March! He was so much smaller then, and very ready to help.
I have loved having a baby with me at work. It felt like the most natural thing. Our employees have watched him grow, he knows them by name and every now and then will want to give them a hug. There are two employees who have been with us since the very beginning. He sees them much more often than his own family. As for being able to work with a baby, for the first 14 months I'd say there was very little effect on our productivity, though our office may have been in a bit more disarray than strictly necessary.  When it became impossible to get our work done with him in the office every day, we made the move to getting him child care.
I have never worked from home, but in my mind it is quite a different thing than what we do. We instead, live at work. That is often said of people that are spending too many hours on the clock, but for us there is no real clock, or at least not one we are ever off of. We are reachable and available any time we are needed, when things need to get done that fall to us, we are sure to do them.
Throughout all of this we have not let our home life suffer, and I believe we have been able to accomplish this because of the blending of the two fronts. It is at times very challenging, because there is no way to 'leave work behind when you get home.'  Some bastions of sanity for us are our date nights, which we started a few months ago, we get them in on Friday nights, at least 3 nights a month.  I also have painting class Tuesday nights which I rarely miss. Some weeks it is the only time I have social interaction outside of the hotel so it is a must-have for me.
Speaking of art, creation is a huge factor for me. As you could tell from my post on our home setup, we have changed everything to make it fit our needs. We have done the same to a degree with work. Instead of cutting things out of our lives, we have been able to sculpt our life around our work schedules. Because we are more flexible with the way we live, and are willing to be fluid with our routines, we are able to have our family life flow around the necessarily rigid work structures towards our goal of a fulfilling life.
Posted by Lady Covington at 11:10 PM