The Terror of Christmastime

Christmas 2013 stands in stark juxtaposition to Christmas 2012.  2012 was technically Toddlesworth’s second Christmas, but he was 11 days old for his first one, so his experience likely went something like “Well, there are blobs all around  me, and milk is tasty.”  In 2012, however, he was a walking talking Toddlesworth just over a year old.  The dragon in the video below was one he had shown interest in at the store.  It was the first time he really showed sustained excitement about a toy.
What the video shows is  exactly what I experienced as a child, and what we hoped to capture for Toddlesworth: the excitement and anticipation of Christmas morning.  I have never been a morning person by choice,  but I never had any problem waking up at 5:30 to revel in the glory of the treasure horde.  The double take upon entering the room in the video is my personal favorite.  Other than that the video explains it much better than I might. (We apologize for the darkness, the only video we had then was a phone.)
For Christmas 2013, we actually had many more presents than 2012.  We expected the same excitement  building off of  his birthday.  He learned and remembered the word “present” just a couple of weeks earlier.  However, Lady Covington and I were in for some rather unpleasant surprises.  To begin with, he was perfectly happy to sleep in until after 8 on Christmas morning.  Lady Covington’s insistent text got me out of bed, but Toddlesworth wasn’t having any of it .  This probably should have been my first warning sign but I soldiered on through waking and dressing rituals for him and myself, somewhat oblivious to his sleepy protests. 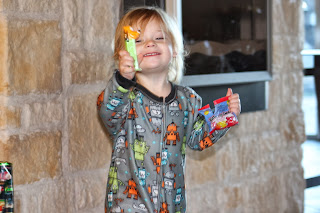 He enjoyed the monkey, and this pez dispenser was the second thing he pulled out. 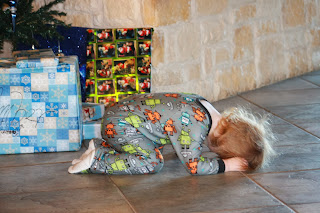 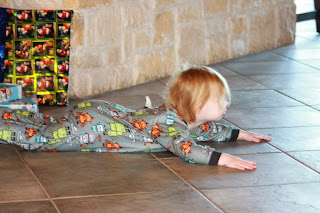 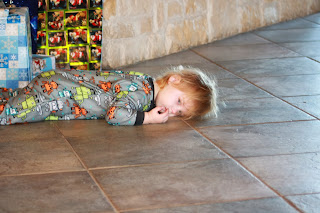 Upon entering the lobby, he began with his stocking.  This was full of exotic and tasty  treats from the internet, and he was very happy with it.  He was less keen on being urged to open boxes in front of a camera.  To make matters worse, the first few presents he grudgingly grabbed were not, in fact, for him, but for Lady Covington or myself.  This was probably the beginning of the downhill slide.  The first thing he opened was a box of perfume.  He could not figure out why this was a thing he should care about it, or why we wanted to stop him after urging him to open presents.  The second present he opened, oh so unfortunately, was mine.  It was, oh man, so unfortunately, a box full of boxes with which to hold my Magic the Gathering cards.  These boxes were as a matter of course, completely empty.  He opened them, and each individual box, as the horror of what was happening slowly dawned on me.  After he opened MTG card box number three he said in a sadly questioning voice “All gone?”.  Really, things were not going well at this point.


A bright spot, thankfully, came next.  He opened a present from my Uncle who I haven’t seen in ten years but was visiting with my mother.  It was Fisher Price laugh and learn puppy. He had one of these in the past and loved it and this was the upgraded version.  In hindsight, it may have been wise to just quit while we were ahead, but what was that said about soldiering on? Lady Covington wanted her pictures, and we would get them! [I can't help but want to get good pictures, it's in my blood!] 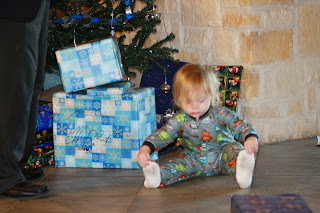 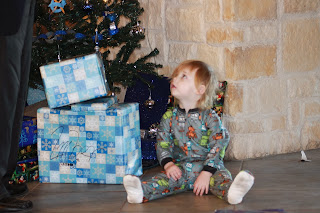 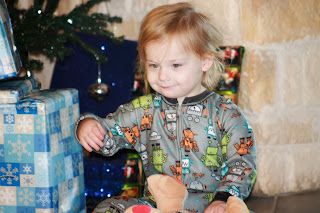 Soon after, he opened a rocket toy.  With this toy, you place the rocket on top of a launcher that is powered by an air pedal you step on.  That experience went something like this: Toddlesworth would place the rocket on the launcher, stomp on it, and then scream like he’d been betrayed by his soul mate when it launched.  THEN, he would go get the rocket with glee, place it back on the launcher, and stomp it again, and scream again, for minutes at a time.  He did this no less than ten times!   (Exhausted fit here) 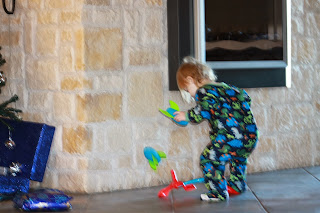 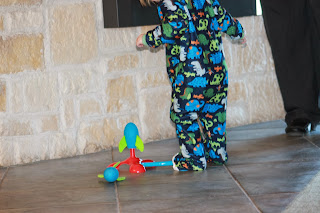 After about halfway through his presents, we all decided that we had had enough Christmas ritual, and we should wait on the rest of the gifts.  We tried napping, lunch and coming back.  He was still not interested in opening more presents for any reason. 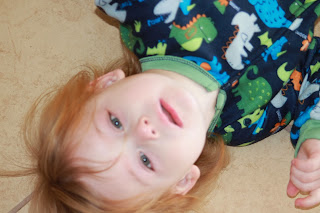 The takeaway from this is that  Toddlesworth is simply not a material boy in this material world.  More presents does not equal more joy.  After a discussion with Lady Covington, we decided we have no need to change his perspective.  I think my son has taught me to be a better person again, without even trying. Darling Boy, I salute you once again! 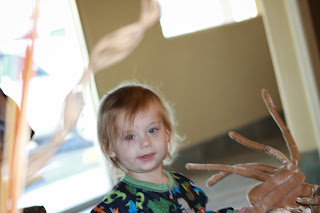 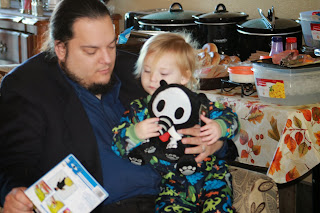 Above are two of the only toys he seemed to get only enjoyment from....one of them is mine (the facehugger) 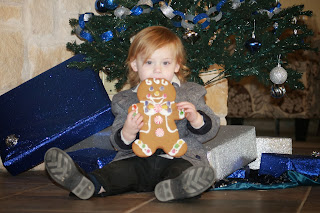 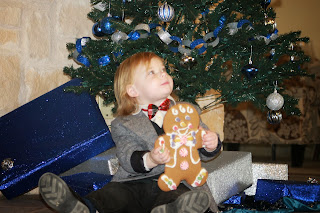 And here are a couple of pictures showing that he can, indeed, look presentable in front of a camera.


[As far as our Christmas went, I got Lord C a couple things he wanted, he got me a couple things I wanted, and apart from it being Fit-mas, it went pretty well. My best present happened as I was putting Toddlesworth to bed that night. Toddles had previously told us he loved us in response to being prompted by the babysitter, but had never volunteered it. I am not one to push him to repeat it, because I wanted him to understand and mean it as much as possible. (I don't like those videos of four month olds saying 'I love you,' and I don't like toys that repeat the phrase either, I'd like it to retain some meaning.)  In any case, as Toddles was getting comfortable in bed, he looked at me and touched my face and said "I love you!" he turned over and cuddled and repeated, "I love you! I love you." four or five times. I can't think of a better way to end Christmas.  We love you too, little guy, even when you're terrible!]


For a video of one of Toddleworth's fits, click here.

Posted by The Covingtons at 7:29 AM