Many of our blogs about Toddlesworth are narrative updates.  I'm never really sure if other people , or at least those who aren't potty training, will share my sense of victory when I exclaim "He got it in the potty!"  I'd like to state, for the record, that I am grateful, for those who choose to bear with us over our own awe of the basics. However, I think anyone can generally get behind things that are common to us all. In the last two weeks, my darling Toddlesworth proved that he has gained a {powerful new weapon in his arsenal}, perhaps that which makes us most human.  Walk with me now through the imagination of an intrepid toddler.

The pretend games started first, as you already know if you read our blog.  Every door is a "sombee door", and everywhere that is dark or secluded has "sombees".  I have run from more imaginary zombies in the last month of my life than in the other 34 years.  For those of you who know me well, you know that number was WELL above zero before, so , one must admit, its rather a lot of zombie sprinting on my part.  Toddlesworth carried it even further, before I knew it had started.  He has been collecting trophies from his one baby war against the undead hordes, with his babysitter as his sidekick.  I found a pile of strange objects on the table in his playroom.  One, for example, was a metal cap with two holes punctured in it.  His babysitter informed me that he let her know it was a "zombie nose". 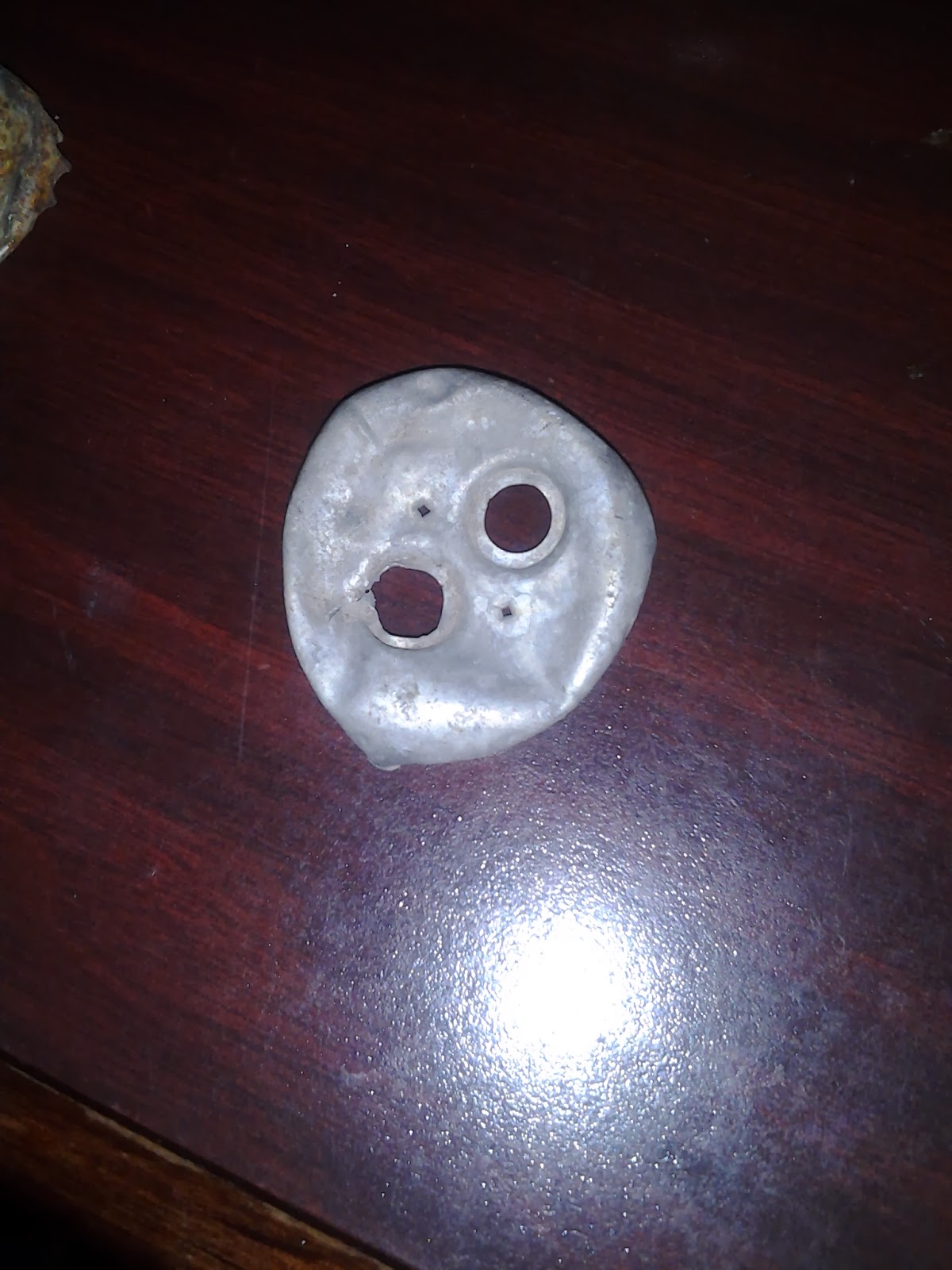 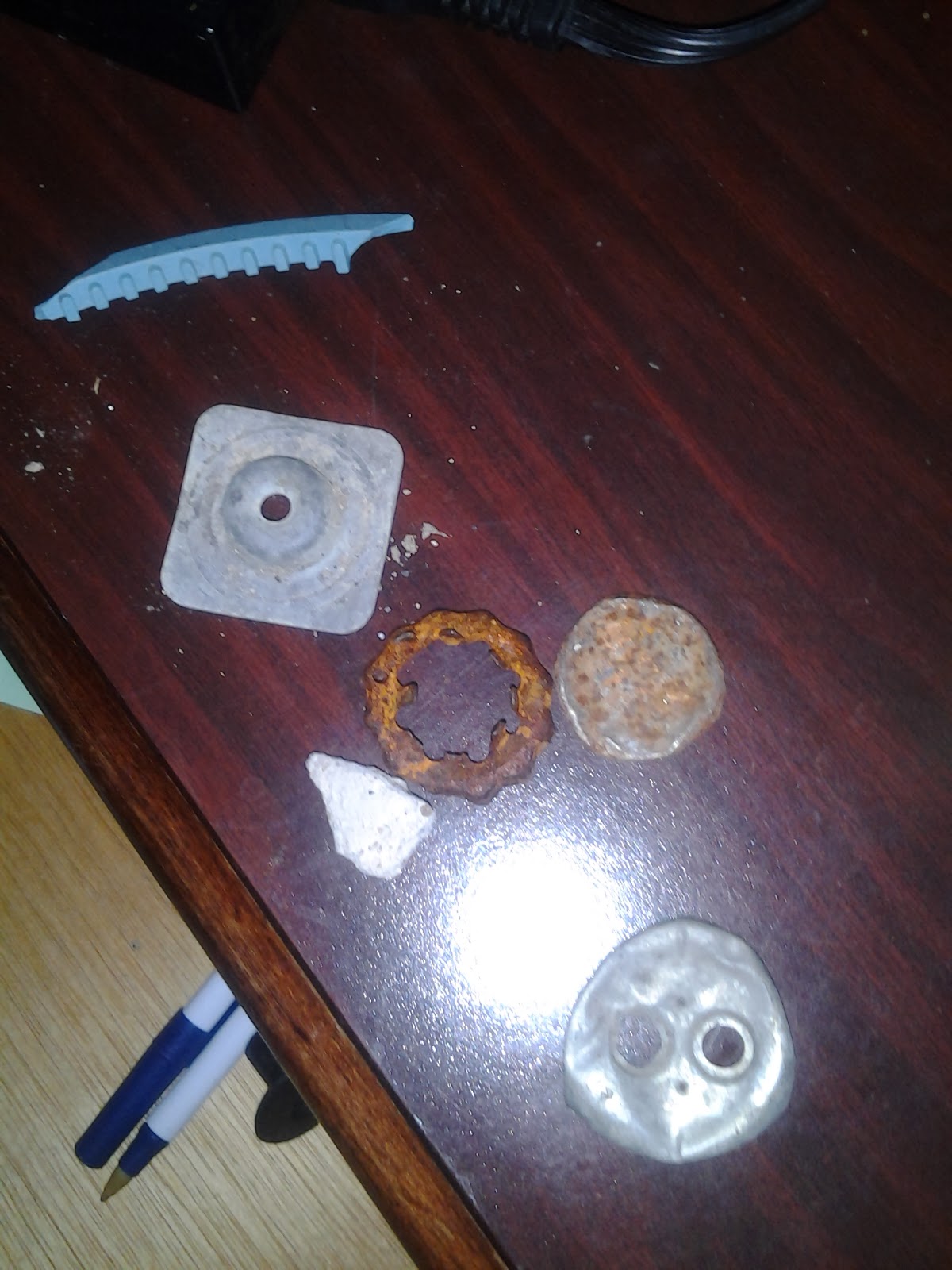 I found out slightly later that on their walks, he hits inanimate objects with sticks, and this is fighting zombies.  I realize that our child is unavoidably having his reality filtered through us, and then reflecting it back at us so I have to pause to consider just how much undead saturation this child has received such that he adores zombies so much that they are his 1st imaginary playmates, or antagonists.    Lady Covington and I love our zombie apocalypses, its true.  We have watched The Walking Dead somewhat religiously since season 2, but that's generally after his bed time.  He has seen the occasional episode with us, though.  While he had a zombie themed birthday party, that was in response to a desire already in place.  Maybe his zombie fascination is truly rooted in the movie Paranorman.  This is the 1st repeated exposure to the undead Toddlesworth has had, and the first movie that showed him what it is to be scared.  At any given point in the day, he will ask to watch "Paroman" .  This movie has zombies that are not lethal, but still evoke fear and running in the living.  While his love of these undead shamblers has older roots, its really only begun to flower in the last few months: if one can refer to zombies as flowering, mushrooming maybe?

He has also begun to put an imaginary filter over things he sees every day.  One of this first words was bird.  He has always been happy to point them out to anyone. He recognizes chickens, eagles, emus, owls, even penguins as birds. Lately, however, he sees them as something else: dragons.  If ever he points to the sky and sees a winged animal, its a dragon. And of course, there is the deer-blind TARDIS he recognizes at the state park.

Toddlesworth is also demonstrating the ability to recognize and recall objects of interest not immediately present.  The other day Lady Covington carried him over to the computer desk and asked what he wanted to watch. He said "cat." Babies don't always answer the question they've been asked, so she played along with what he had recently been doing, and said "cats say meow! What do cows say?" His brow furrowed and he muttered "Watch. Cat". When Lady C just didn't get it, he then paused, and with an intense scowl said "Hat."  Then, definitively, "Cat, Hat".  Lady C thought for a moment and asked him - "Did you want to watch the Cat in the Hat?".  His face brightened immediately as he said "yes!".  It turns out he had spotted the CD on the top of the table, which had a fish in a bowl on it. He recognized the fish, remembered the cat was a major player, and when 'cat' wasn't enough to clue his mother in, he thought very hard about something to distinguish this particular cat.

We both find it very important that he develop his imagination, and practice memory. Through his life he has gone through many nighttime rituals. In the beginning we sang a modified "Hush Little Baby." Around twenty months he created his own game of "Haughmanagh?" We had no idea what he was asking until he held up one of our hands and repeated it, then we realized he was asking "How many?" We would say "five" and he would push our fingers down one by one as we counted down "four, three, two, one, zero." "ZERO!" he would repeat cheerfully, then open up our hands one finger at a time and have us count back up, sometimes closing all our fingers and sometimes not, switching back between his mom's hand on one side of him and mine on the other. When he was satisfied with the amount of repetition, he would request songs.  Within the past few months his longtime favorite of Hush Little Baby was replaced by 'roll over' aka, "ten in the bed" Toddles becomes very upset when there is only one (he assumes they are monkeys) left in the bed. As such, Lady C has modified that song as well. Now, when there is one monkey on the bed, he says he is lonely, and the monkeys start rolling back. "There were nine on the floor but the bed could fit more, roll over, roll over. So one rolled over and one got on. There were eight on the floor but the bed could fit more...." The simple mathematics of it can get a bit challenging when it is 10 pm and your baby is still awake and you just want to relax for a bit. This movement towards counting-based songs and games at night time has even more recently been replaced by something completely different.  On Christmas, at naptime, Lady C told Toddles the story of a dragon-boy who had to learn to calm himself down or he would set things on fire. Toddles loved the story, requested the dragon go after zombies, and has requested zombie stories at bedtime fairly routinely since then. We read recently about a father telling stories to his son and asking for input: "They went into the pet store and saw...." Our plan is to start incorporating this into his nighttime story, and hopefully we can create a serial nighttime story, with us asking him what happened each previous night before picking it up again.
Finally: Toddlesworth dreams.  I'm sure it has been going on since before he could talk, but what is more important, when asked, he will now tell us a story about it.  So far, granted his stories run along identical themes of "Adam and 'Lin'sy'" ( his baby sitter and her son, Toddlesworth's play mate.)  We would like to think we have been seeding creative dreaming for a while now.  One of Toddles. favorite books for a while is "Moonpowder": the story of a gadget making young boy recruited by the Man-in-the-Moon to repair the Moonpowder Factory and save sweet dreams.  There is rarely a day that goes by that he doesn't ask for 'Powd'r'.
The phrase"We are the music makers, and we are the dreamers of dreams" ( imparted to me by the immortal Willy Wonka handed down from Arthur O'Shaughnessy's "Ode") has always been one of my mottoes.  From crafting illusionary worlds at the gaming table to horrors in halls at the Hilton Midland Plaza's Murder Mystery Dinner theatre right here in reality, I have dwelt in Fantasia and brought Fantasia to Mundania.  It's almost something of a crusade for me.  So I take it as a solemn duty to guide my son's own growing imagination.  And as the seed blossoms it is a joy to witness.
Posted by Lord Covington at 9:52 PM