In a recent post, we discussed how certain tv programs may have negatively affected Toddleworth's views on gender. Now, we are discussing the movies that he watches. We started here with Frozen. and continued with Monster House, The Little Mermaid, and ParaNorman, Here is the continuation: Nightmare Before Christmas-- Oh, how I wish I had watched this show when I was younger. Can it be true that I was only nine when this came out? I don't think I watched it then, I was in a phase where I thought I was too old for it. I never understood how it became such a pop phenomenon (as indicated by merchandise *still* available at Hot Topic.) Anyway, if I had watched it sometime between then and now, I would likely not have let Toddles see it.  It is a neat film. A bit gritty/spooky, but not too much for a toddler--at least, this toddler. However, there are only two females that can actually be called characters in the film.  One is Shock, the tallest member of the Lock, Shock, and Barrel trio. 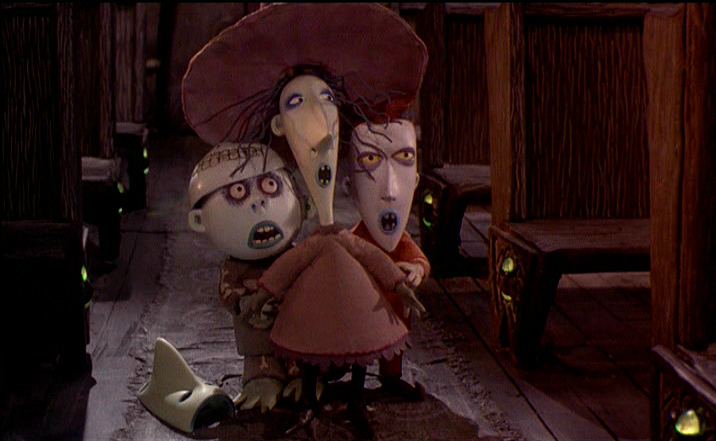 These three aren't extremely dimensional characters. Shock doesn't differ in action from the two boys, but she does wear the standard pink/purple for her Witch's outfit.

Sally is the female 'protagonist' in this story. Sally's effect in the movie can pretty much be summed up in how she is characterized in the opening song "This is Halloween." The townsfolk introduce themselves via their scare tactics:

"I am the clown with the tear-away face
Here in a flash and gone without a trace
I am the "Who" when you call, "Who's there?"
I am the wind blowing through your hair
I am the shadow on the moon at night
Filling your dreams to the brim with fright"

Who is Sally?  Sally is the F*ing hair the wind blows through. She is an object in the song, and may as well be an object throughout most of the movie.

Sally is so... ineffectual I don't even know if I can properly describe it without being distracted by how much I've come to hate her.
Sally's abilities can be summed up in three points:
Cooking/use of herbs
Sewing
Letting the men in her life control her actions, even when they go against good judgment or impair her freedom.

Cooking and herb use:  Sally cooks for Dr. Finkelstein, the mad scientist of the town. She has 'poisoned' him on several occasions, using herbs such as deadly nightshade to knock him out so she can gain a few minutes of freedom. Like an abused wife, she always ends up back in his clutches. At one point she picks an herb that transforms in her hand into a animated Christmas tree, then burns to ashes. I don't know how common premonitions are in Halloweentown, but hers goes completely unheeded. This aspect of her personality is something of a pathetic, watered down BlackWidow trope.  At least a standard Black Widow receives rewards for her behavior.  This one bemoans her paternal figure and still ends up in his possession.

Sewing: Sally is a rag doll. Thus, she has the ability to reattach pieces of herself when they come undone. At one point she rips off her arm and leaves it with her captor/creator. At another point, she throws herself out of a window, breaking her body into several pieces, to escape her imprisonment. It's ok though, she brought a needle and thread to fix herself back up and escape, so that she could give Jack a basket of food she cooked up for him.

After she jumps out of a tower and feeds Jack, she has the premonition. She finds him again, and they have this conversation:

JACK Fantastic!  Now why don't you all practice on that and we'll be in great
shape.  Sally, I need your help more than anyone's.
SALLY You certainly do, Jack.  I had the most terrible vision.

SALLY No, it was about your Xmas.  There was smoke and fire.

JACK That not my Xmas.  My Xmas is filled with laughter and joy and this--my
Sandy Claws outfit.  I want you to make it.

SALLY Jack, please, listen to me--it's going to be a disaster.

JACK How could it be--just follow the pattern.  This part is red, the trim is
white.

SALLY It's a mistake, Jack.

JACK Now don't be modest, who else is clever enough to make my Sandy claws outfit.

JACK I have every confidence in you.

SALLY But it seems wrong to me, very wrong.

Obviously, she doesn't get him to listen to her. And instead of refusing to help with his plans, which she doesn't agree with, she just goes along with it.
She sings a sad mournful song after her premonition, when she is unable to stop Jack from going through with his utterly terrible plan. In it she laments that they will not end up together. I don't know  Sally, you've got a pretty good shot.. you're basically the only female in this world.

After using her disembodied leg to sexually distract the villain who is holding Santa hostage, She does warn Jack in the final battle to watch out, and afterwards, Santa Claus tells Jack he should listen to her and refers to her as 'the only one that makes any sense around this insane asylum!"
For an alternative view, here is a positive take on Sally. Though I can understand their point of view, I just can't help but see her as weak, submissive, and stereotypical.

Remembering my high school days, every other girl I knew wanted to be Sally, or at least wore her merchandise.  If you can follow the logic that she is an unhealthy image for women, then her prevalence among my generation becomes even more unsettling.

Agency: Her actions revolve weakly escaping her captor, then trying unsuccessfully to warn Jack. She seductively distracts the villain with a disembodied leg. She is not completely without agency, but it does seem to entirely revolve around men.

Backstory/Goals: She was created by Dr. Finkelstein, though we don't see that. She woefully wants to be with Jack but doesn't approach him. Her future plans seem to be poisoning her captor for a taste of freedom and pining over the town hero.

Traditional Gender Roles: She cooks, she sews, she is demurely submissive to the men in her life... She's basically a 1950's ideal housewife.

After doing even cursory thinking about this movie, I feel mostly guilt at letting him watch it for two reasons.  I don't think I have to repeat the repulsive depiction of women is a problem.  So instead I'll feel guilty about trying to superimpose my own childhood memories on a boy trying to make his own.  Firstly, I was throwing these things at him without thinking critically about them.  Second, as I roll through my 30's I've come to realize that I have been, until recently, trying to make up for anything I was denied as a child, whether it's healthy or not.  It has lead to some metaphoric and literal gluttony, and the selfishness of my young adulthood caused unnecessary strife in many relationships.  Having a son forces me to realize that is no way to be a father, a husband or a friend.  While I certainly want to share with  Toddlesworth the benefits of cool media I had growing up ( I already think today's cartoons suck), I can and will do better than just throwing crap I watched as a teenager at him.

Posted by Lady Covington at 5:39 PM