Pregnancy: The Second Time Around

I'll be hitting 36 weeks in just a few days. The time has gone by very quickly with life in general and all the extra prep work to situate our life with the new addition of little Wiggles.

It's really common to hear that every pregnancy is different. There are several ways in which this is definitely true for me.

With Toddles, I didn't really have any 'morning sickness' (Though there were a few times before I found out that I remember complaining that Lord Covington was driving too quickly!)  This time around I had nausea for at least the second half of the first trimester. Thankfully it wasn't continual and never got to actual vomiting.  I had symptoms I ignored/miss guessed for the first 6 weeks or so with Toddles, but I was actually looking for symptoms and had none for about 8 weeks with Wiggles. (I feel like my first trimester really only lasted about 7 weeks, since we got a date ultrasound at 10 weeks and I'd say most of my first trimester symptoms didn't start until 8.5 and ended around 15.)

I started this pregnancy at a much healthier weight. Even though my weight gain is still much more than it should be, I'm still under what my weight was at 20 weeks with Toddles, and I don't really expect to go over that. I'm sure it's directly related that I had terrible heartburn with Toddles and I've only had it three times with Wiggles. I also haven't had any edema this time around, except for one night where I fell asleep sitting up with my legs crossed!

As a side effect of weighing less, I am proportionally more baby. This means I get to have more of a baby belly than I had last time! It has also made it much easier for me to feel and see Wiggles moving around. Often in this pregnancy I've tried to make a few minutes in the evening to lay down and watch/feel Wiggles moving around. I've got several videotapes of his in-utero antics, and even caught him hiccuping on film once! (Oh man, I love feeling baby hiccups. I was actually somewhat worried I hadn't felt them, finally did the morning of 30 weeks, and have several times since.)

Even though I'd objectively say I'm in better shape this time around, it is strange that my body seems to be under more stress with this pregnancy. I've had more back strain and general tiredness, especially with the first trimester. I attribute most of this to having a small child constantly asking to be carried and still occasionally keeping me up at night.

Even with all of these changes, the biggest difference for me has been emotional. There was a recent Dr. Who episode where The Doctor says love is not an emotion, it is a promise. I do believe it is an emotion, AND a promise. Sometimes I personally feel the emotion of love very deeply and it is all consuming and sometimes I know I love my husband but I might not be feeling it too much just then. I think separating love from emotion is not that uncommon, or there'd be a lot more cheating on your significant other just because you're mad they didn't take the trash out.

For Toddles, before he was born, I knew I *would* love him. Once he was born, I *knew* I loved him. I didn't actually FEEL that I loved him until several days had passed. I think I've written before about how I mostly just felt confused about what made him mine as opposed to someone else's. I had to bond with him day by day after birth. Part of this I'm sure was not having the birth experience I had hoped for. A larger part I think was just not knowing what being a parent entailed, in general.

This time around, we got more and better ultrasound pictures.  For our dating ultrasound Wiggles was further along, and the doctor gave us a CD including movement where I could watch him wiggle around. We got our dating done at about 18 weeks and found out we were expecting another boy (and for some reason we were once again surprised.) I will admit there were a few weeks of gender disappointment. It had pretty much dissipated for me by 20 weeks, when we got a 4d ultrasound done while we were visiting friends and family in a larger city. We got to see him reach for his toes and bicycle around. The pictures were blurry as they will be with that type of ultrasound at only 20 weeks, but it was wonderful to get to see him. 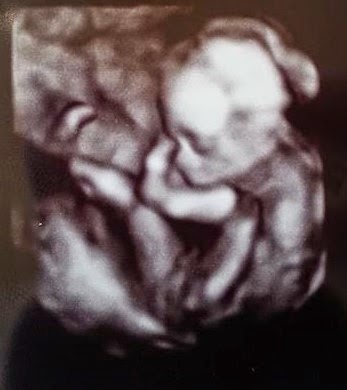 I thought that would be my only chance, but ten weeks later, I visited my mom and paid twice as much for another 4d visit. (A different town with fewer options)  Even though we only got to see him for a couple of minutes before he turned his back on us, and even though he somehow managed to have both feet and a hand in his face during those few minutes, they are still treasured pictures. I explained to Lord Covington that, crazy as it seems with the baby wriggling around inside of me, I had mostly just wanted another set of ultrasounds because I *missed* him and wanted to see him again.

I think overall the ultrasounds may have helped us bond with him, but they are more a symptom than a cause. They are symptoms like me wanting to get all themed things for his 'nursery' area, I just want to make his space nice for him! I admit I bought a 3-6 month toy at Christmas, with the intention of saving it for him. A couple weekends ago, we went to a travelling dinosaur exhibit, and while picking out a souvenir for Toddles, I had to fight the urge to buy something for Wiggles. (Look, those dinosaurs would match his room theme colors wonderfully! Ooh, here's a dino-baby-rattle!) I decided I had to draw the line at buying souvenirs for places he hadn't actually seen. I know Lord Covington is having some of the same urges, because he had to leave town for business for a week, and came back with a gift for Wiggles.

I wanted the extra ultrasounds *because* I already feel bonded with him. I don't just *know* I *will* love him, I already FEEL that love. I can't wait to cuddle my adorable little boy. I can't wait to see Toddles be the wonderful big brother I know he will be, and to see my wonderful husband step up and co-parent like a champ. I should only have about a month to go, and while I am grateful for the time to get everything finished up, it still feels like it is taking forever!

Posted by Lady Covington at 2:51 PM