What I've Been Up To: Nursery Projects: Rocket Rollercoaster Table!

This may only be tangentially a nursery project, since it will be a while before Wiggles can play with it, but whilst pinning lots of wonderful rocket themed things to my retro rocket room board, I came across this super cool rocket themed roller coaster table. 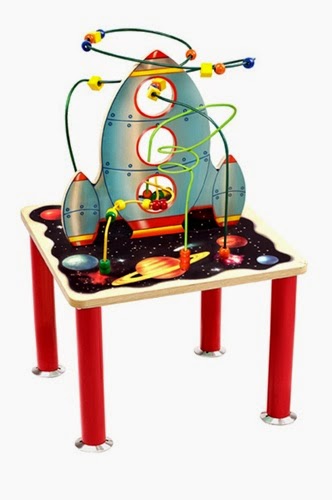 The price was a bit outside my range, being something like $200+, so I sent a picture to my mom a couple days before I was heading to visit her, and told her we should make one.  I expected her to laugh it off, but she was super enthusiastic instead! She told me she'd look for some wood and start making rocket patterns. 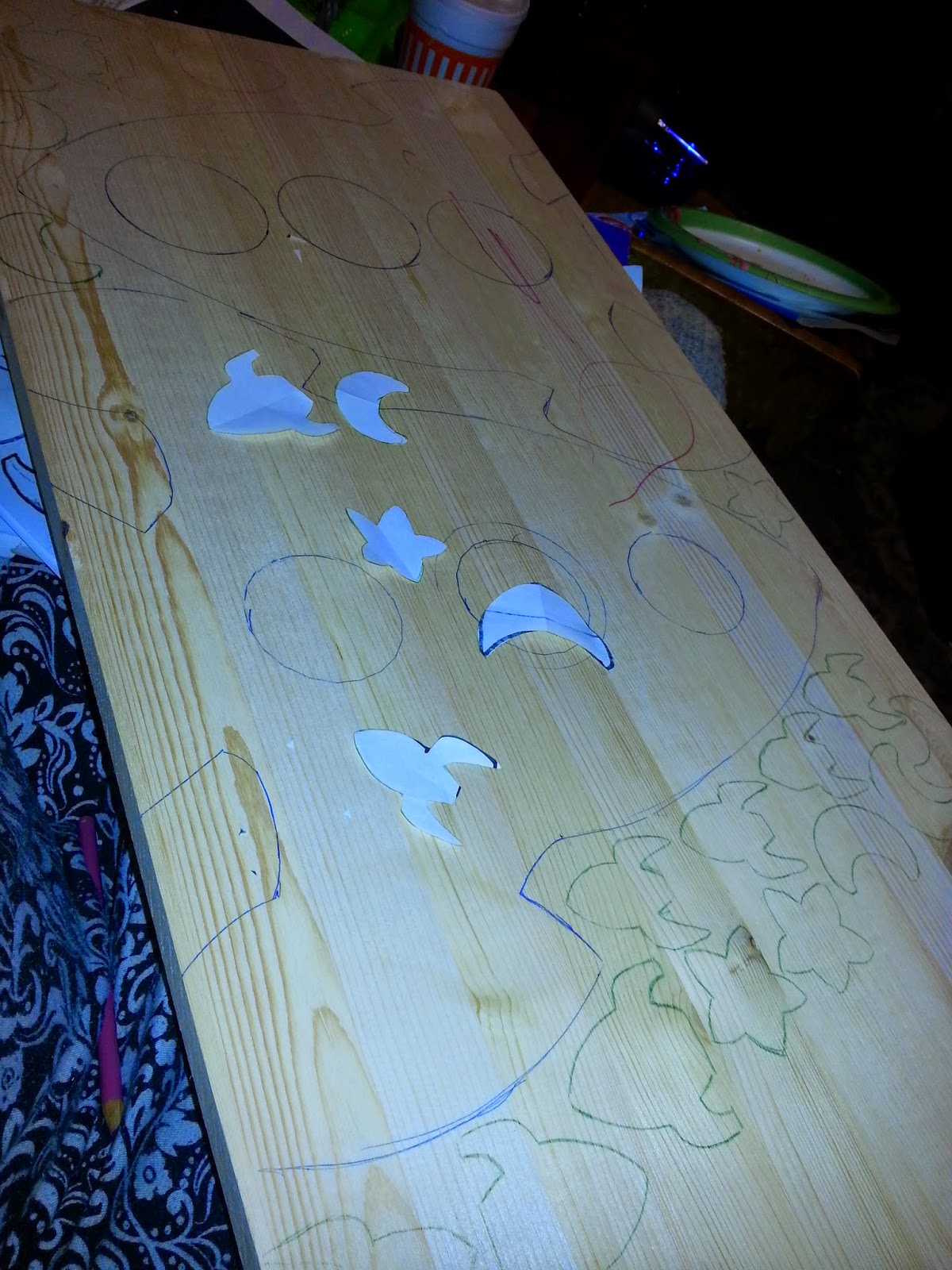 She didn't find any good wood to use, so we did have to end up going to the store for wood and a few other things. I had planned on using macrame beads I knew she'd had for a few decades, but she suggested making smaller rockets/space shapes and cutting them out to use as beads. I thought this was an awesome idea, so I traced all the pieces, including the rocket pattern she made (Two versions with different sized holes.) and she cut them out (in freezing cold weather, because she's awesome.) 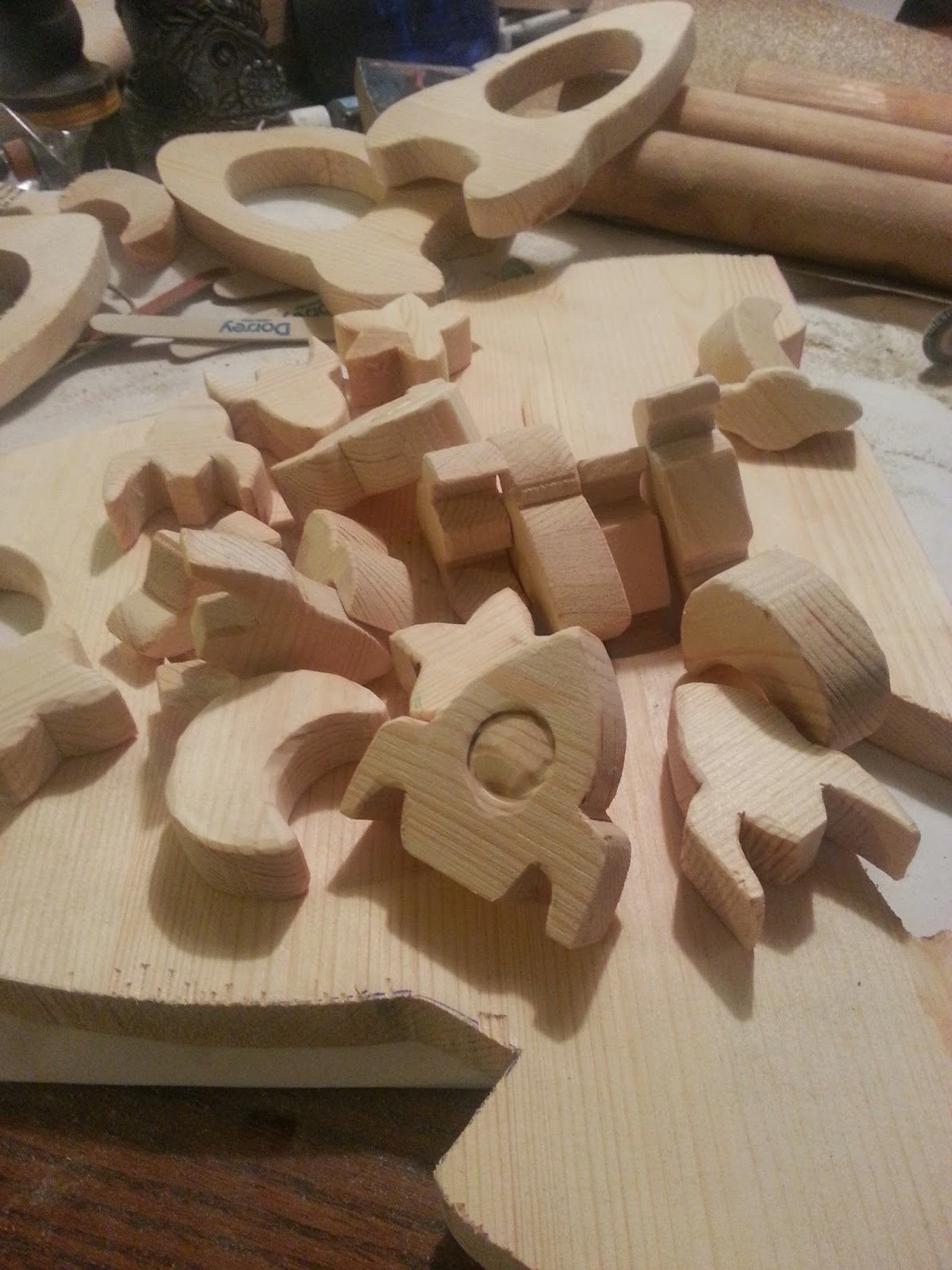 The sanding took forever with a dremel, so I ended up having to take all the unfinished pieces home to complete the project.  Very early on I realized this would not be a project with a 'professional' looking finished product, so I embraced the quirkiness of it. 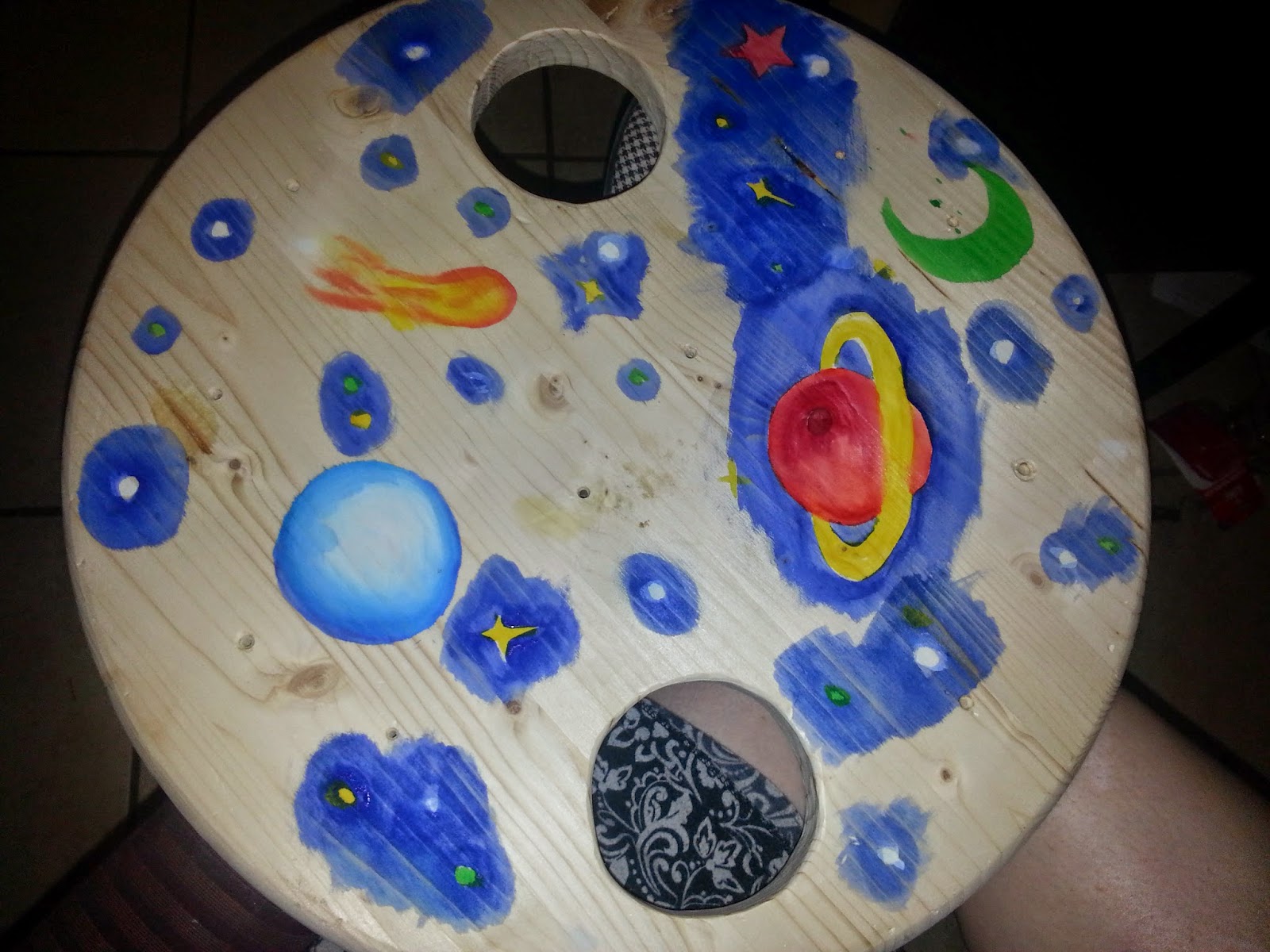 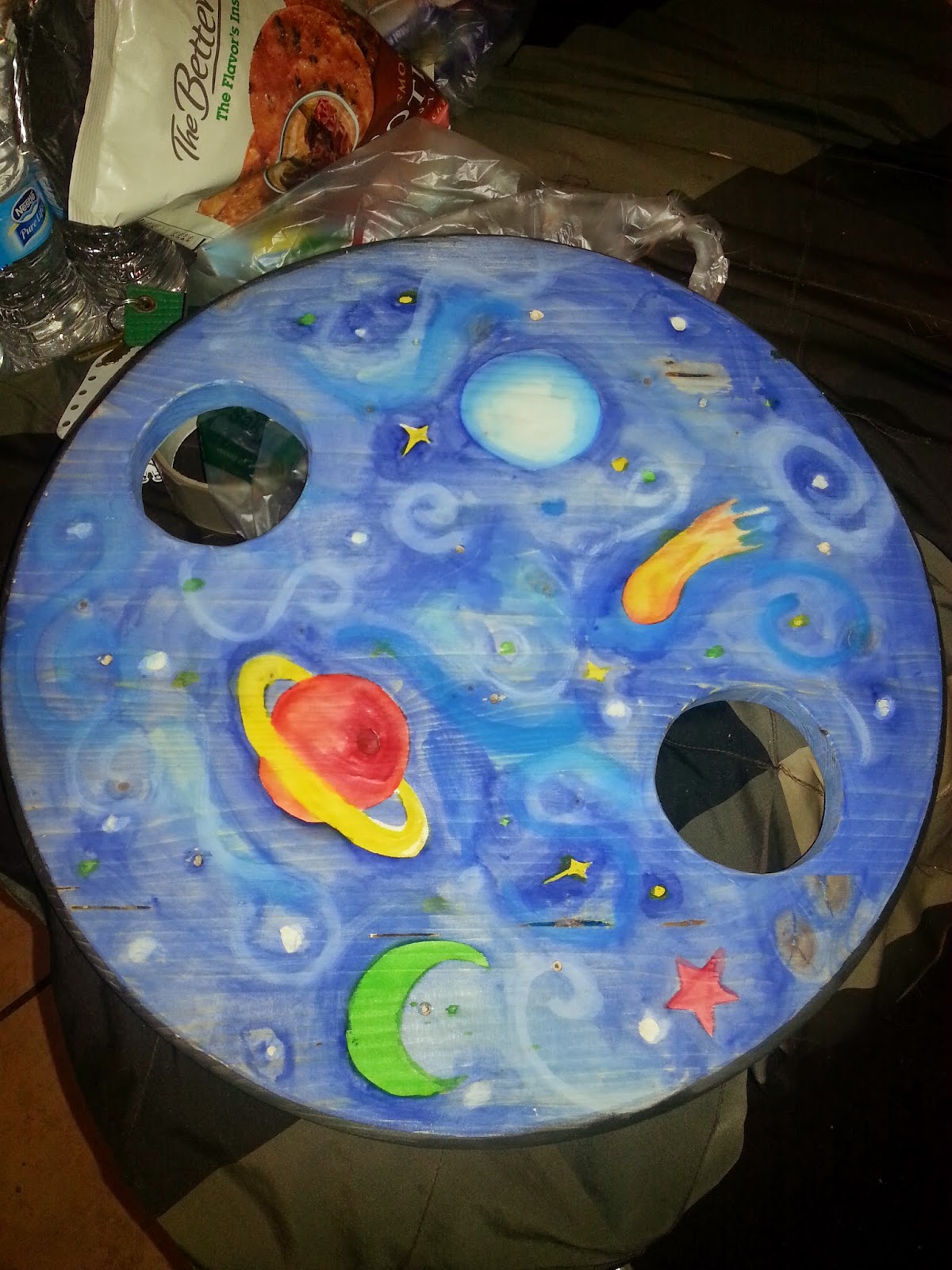 Here is the table top at the beginning of and after staining with watered down tube water colors. I had decided to try making holes in the tables and wrapping wire around the legs and through the holes. 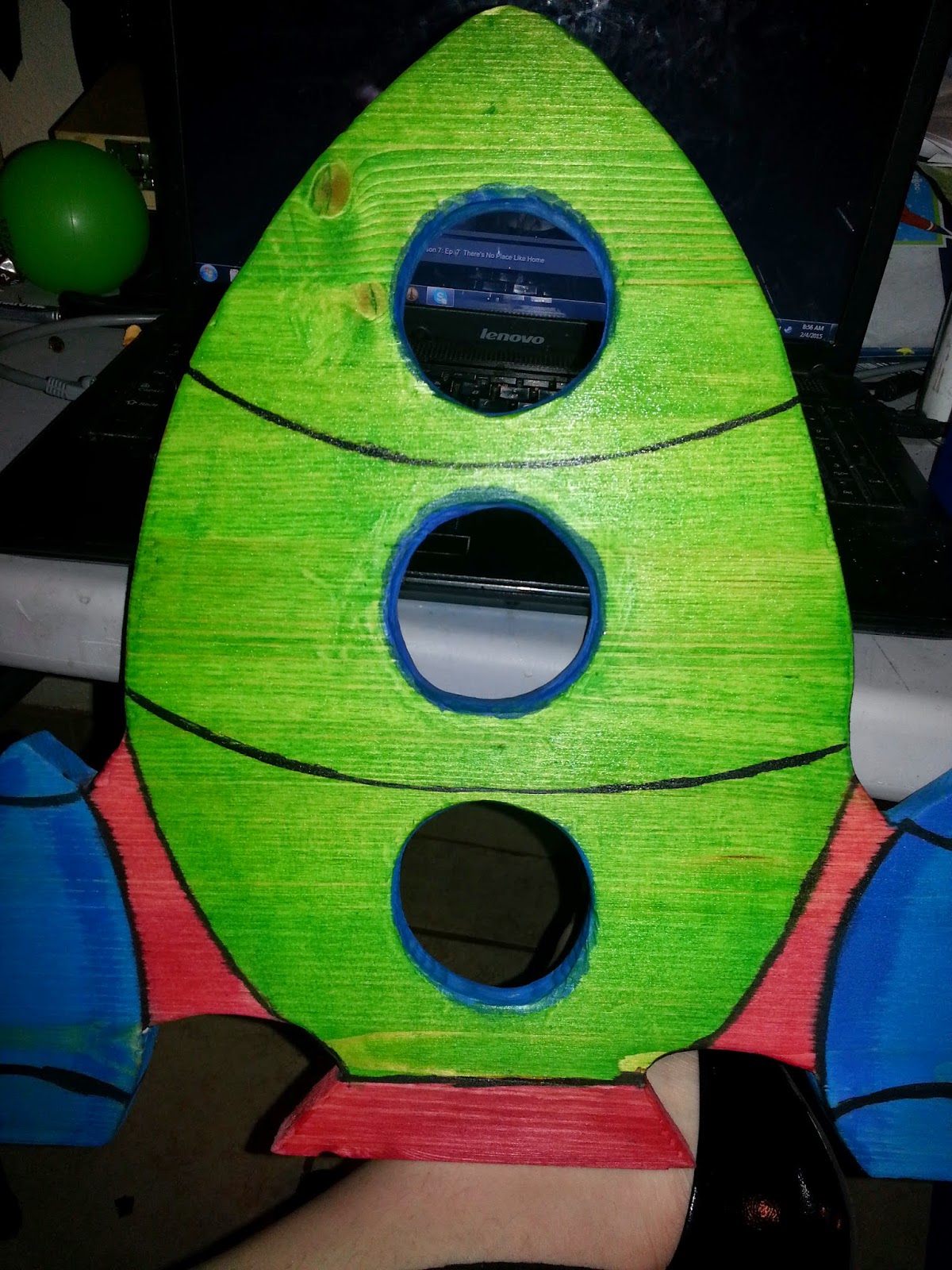 I enjoyed painting the main rocket, and thought that the shaped beads turned out really well. 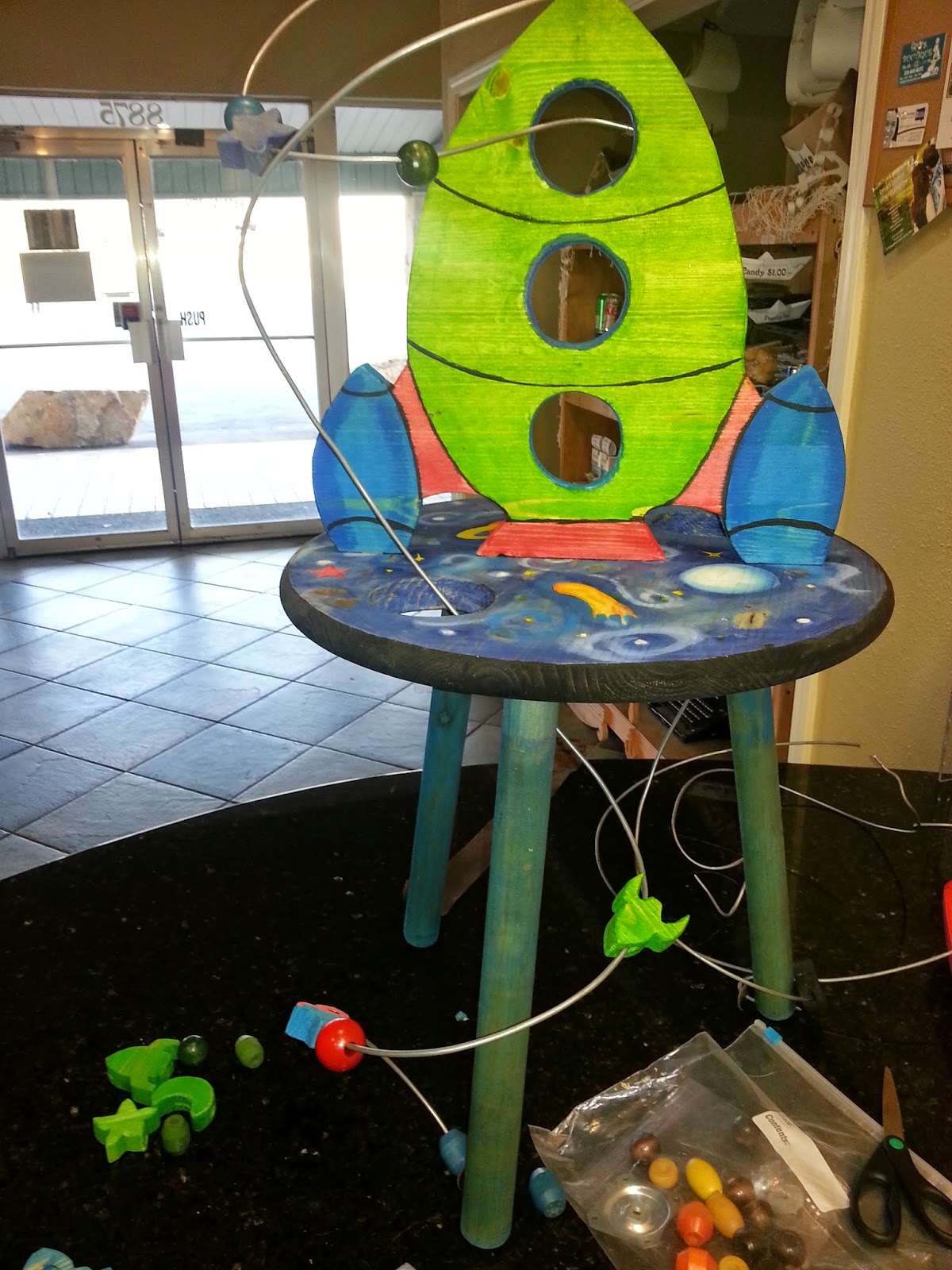 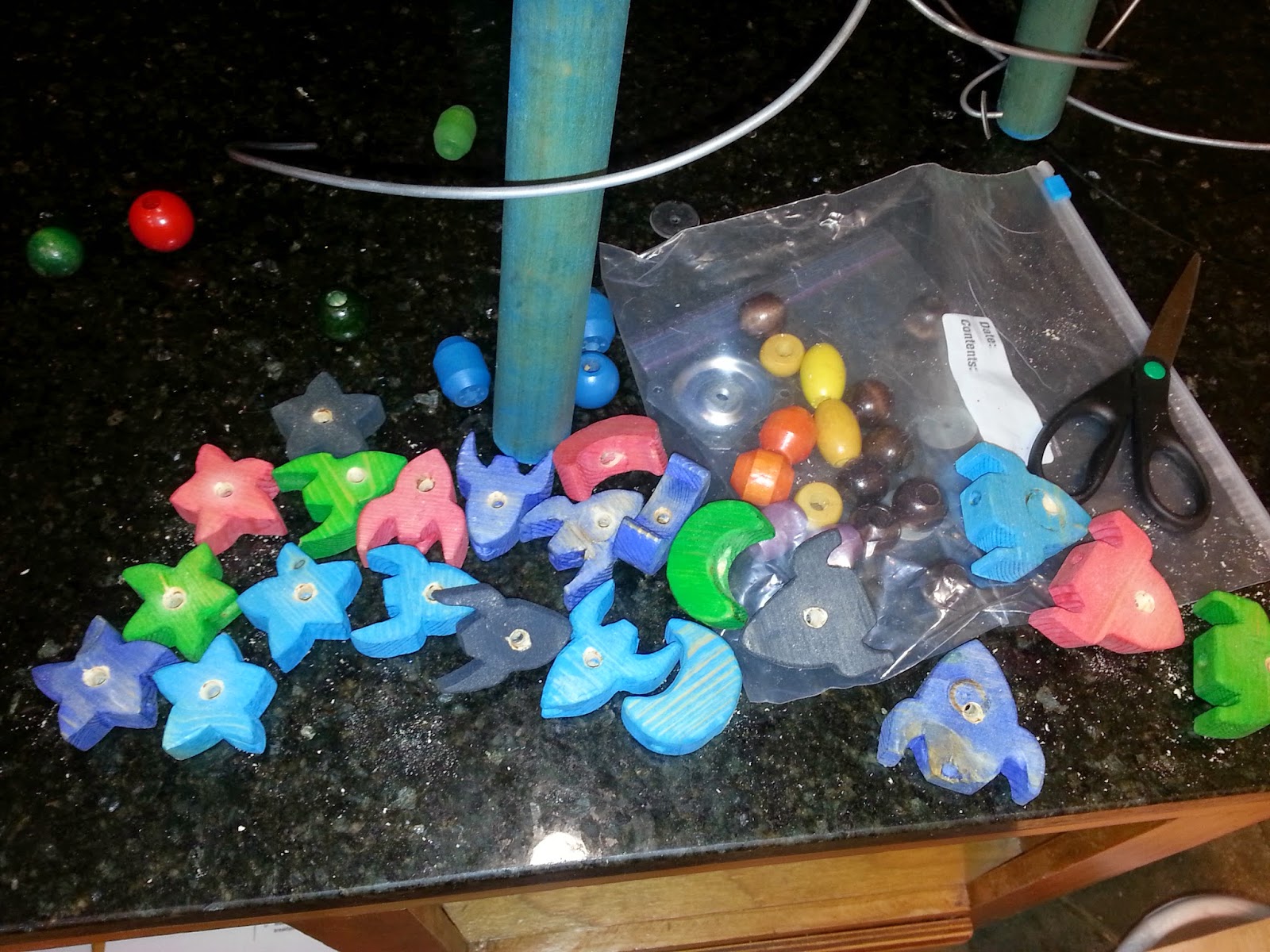 I ran into problems with the beads fitting around the bends of the wires, so I had to do a last minute change of orientation. This involved drilling each hole three times with increasing drill bits to make the holes big enough, then sanding each end of the holes.
I *should* have repainted the raw wood, but I was far too ready to be done at this point. 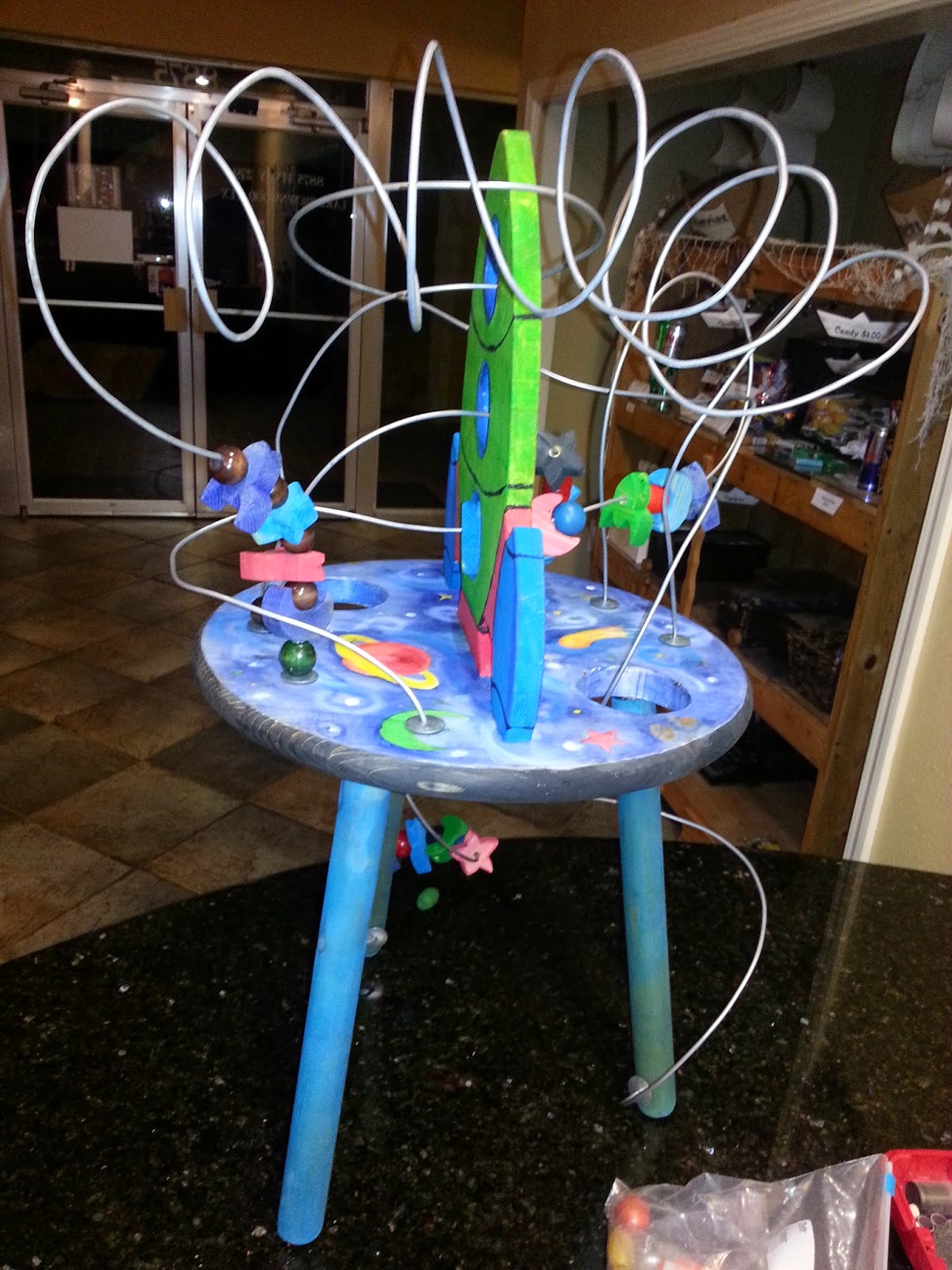 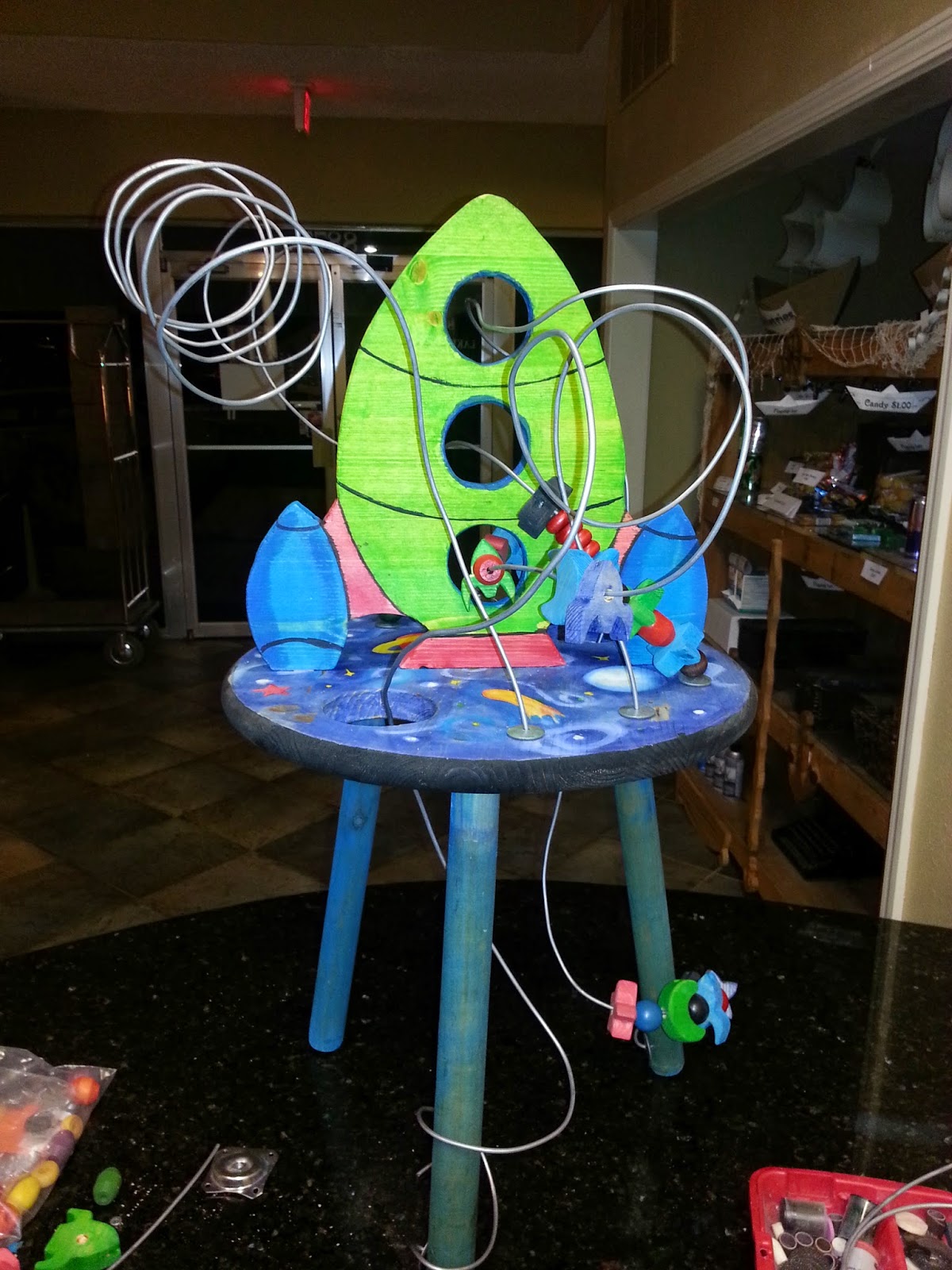 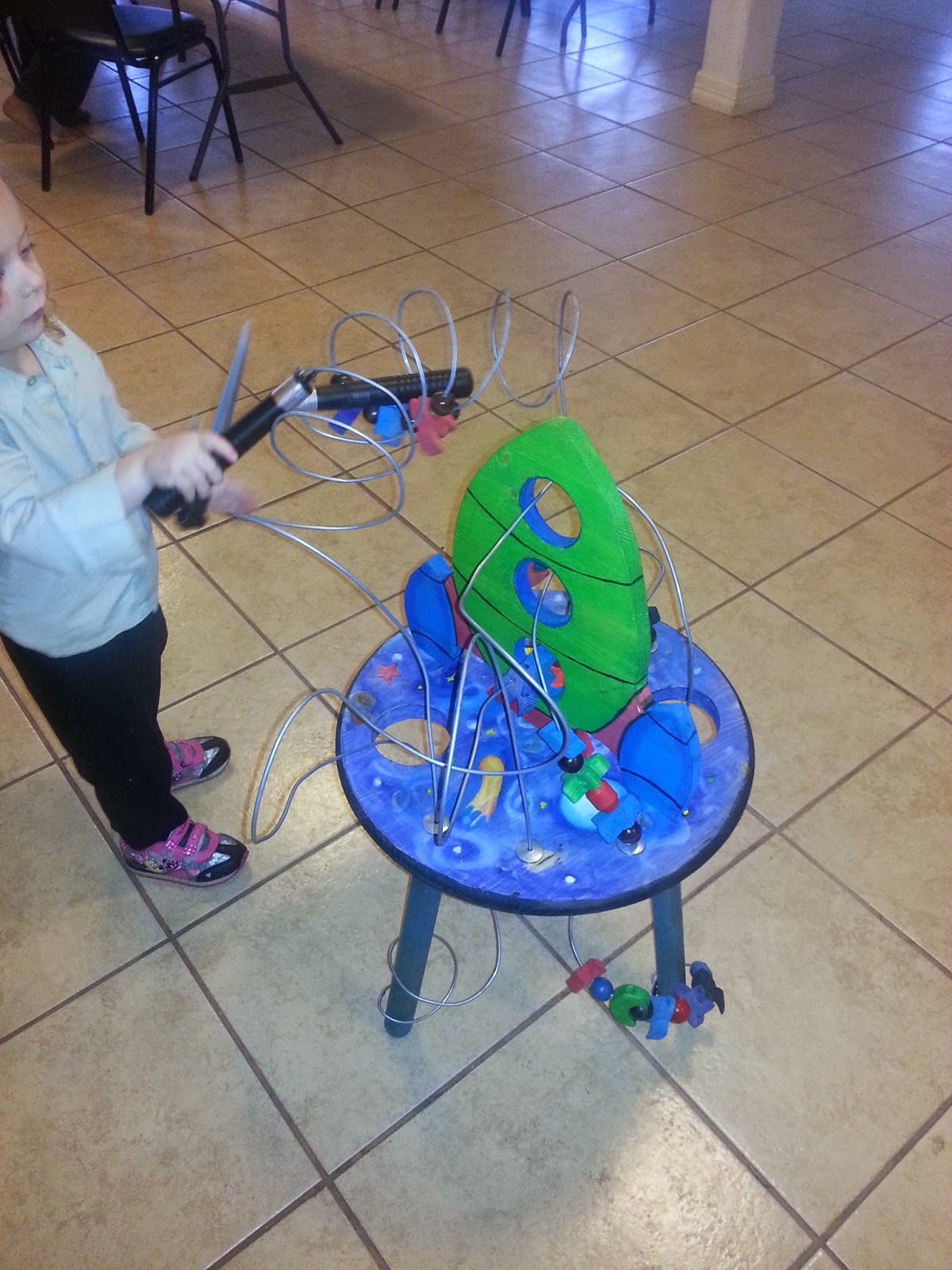 
The wood was the most expensive part of this project, being about $25. The tube watercolors were about $7. I would have like to use liquid watercolors if I had them on hand. The wire was some my mom had, but likely would have run less that $15 if I had needed to buy it. The beads were on hand or made from the wood.

All in all, even though it isn't as perfect and shiny as the inspiration table, I am quite pleased with the results!

Posted by Lady Covington at 6:54 PM