What I've Been Up To: Nursery Projects: "Sons" Sign!

So, here is the last nursery craft update. I thought it would be cute to have some nursery wall art like those vinyl inspirational quotes, involving a pun on son/sun for our space theme. I thought surely it was obvious and must exist, like the 'No Wake Zone' signs for nautical nurseries. When I couldn't find anything I decided to make it myself. 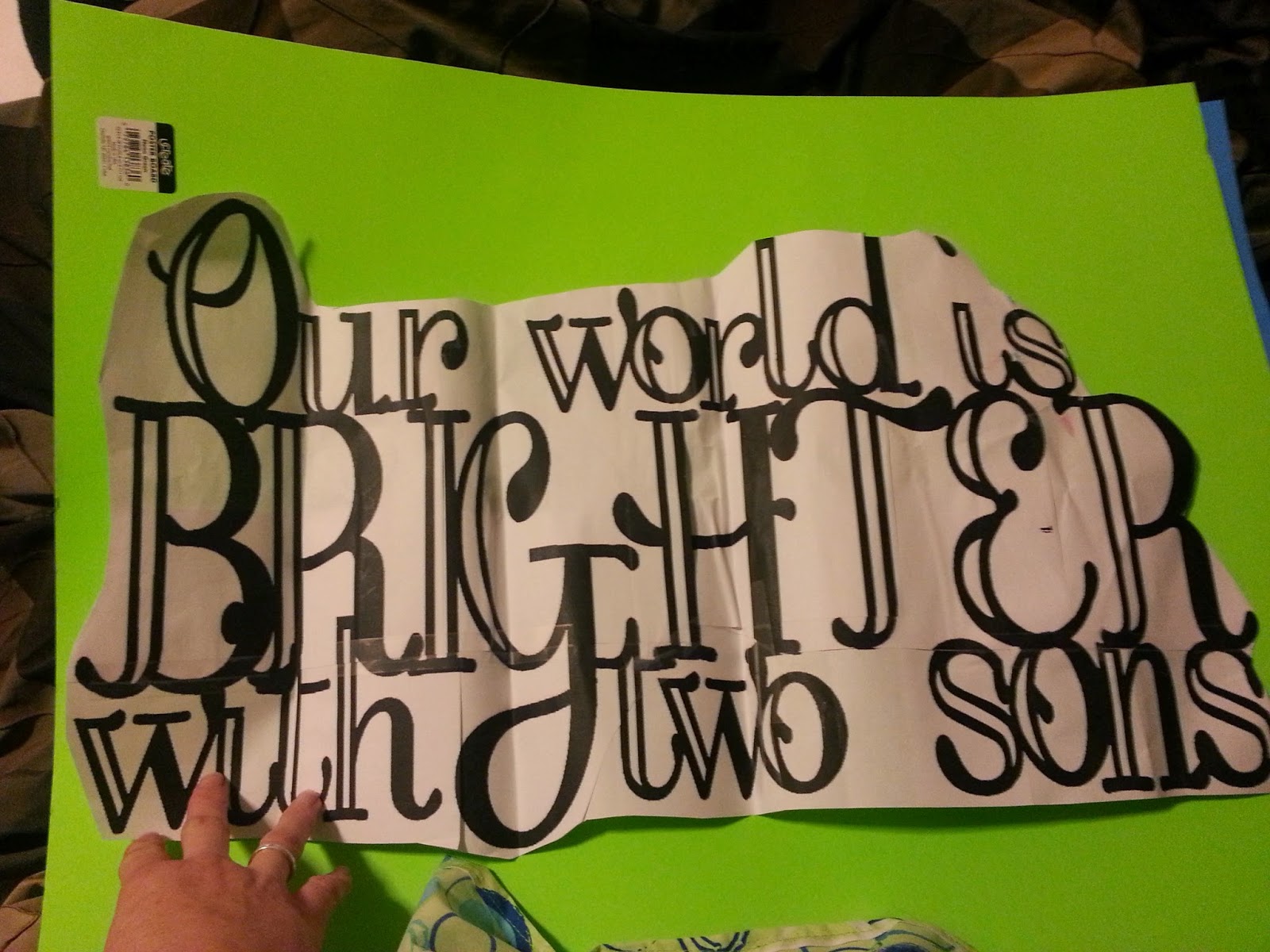 There is this thing that Toddles does, where he expects any two things he wants to be available, smashed together online in game form. Sometimes the universe has his back and you get phone games like Ninja Turtles Vs. Zombies. Other times we just have to tell him it doesn't exist yet.

It seems I fall into the same trap sometimes. If I can imagine a useful website I assume it has already been made.  I was hoping to find a website where you can input whatever text you like and it will organize the words/change fonts and sizes to make it all be connected. As far as I can tell, this does not exist yet.  Thus, I had to create it by hand.

I found an in browser application called Cricket Design Space specifically made to work with the cricut machine. (Unfortunately I don't have one of those.)  The reason I used this program was because in my research I had found it had a tool called 'weld' that joined pieces together. I assumed this was an automated process, but once again I was mistaken. You have to manually maneuver the pieces into position, the weld function just tells the machine not to separate the letters at that point. 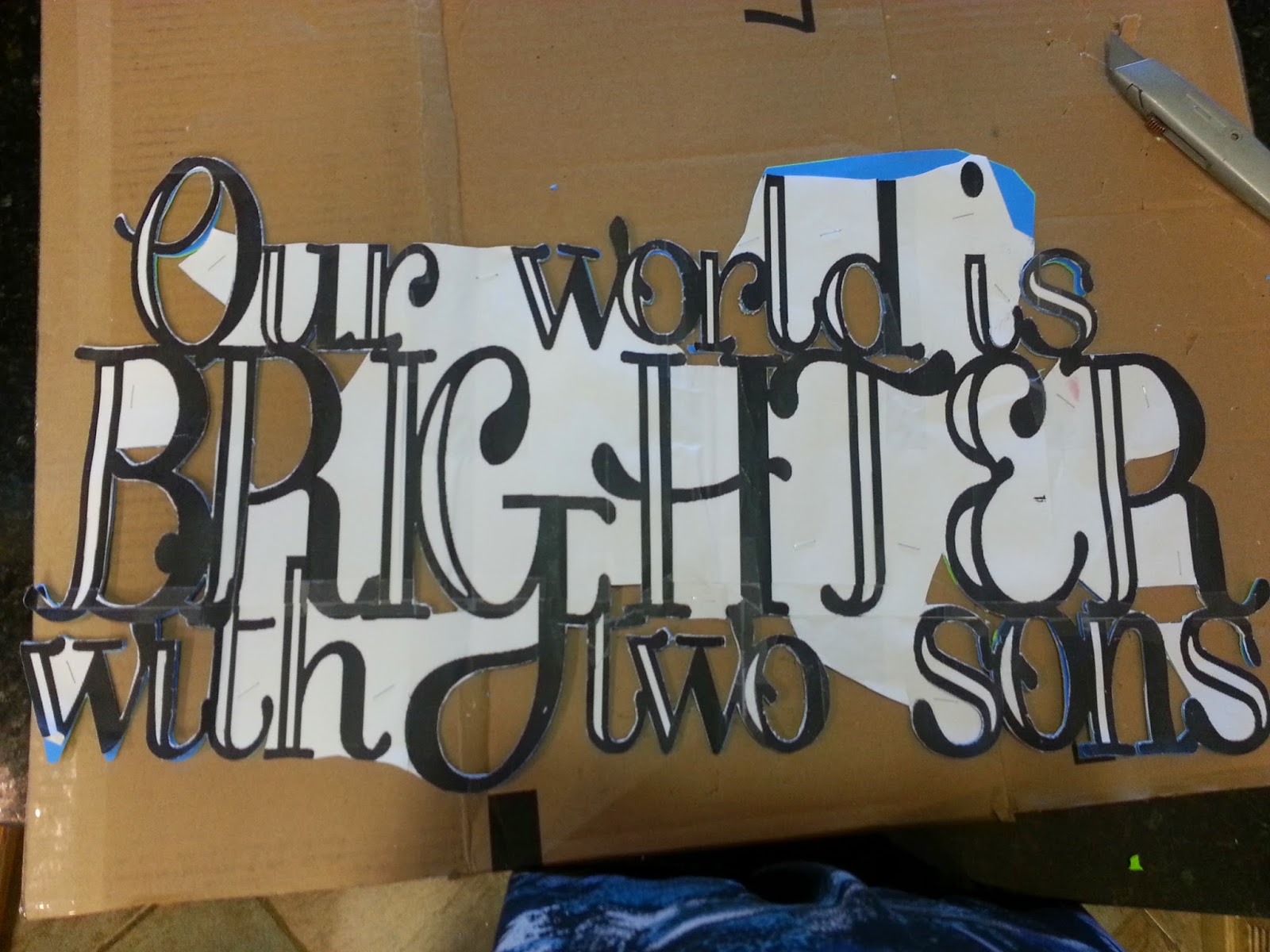 By the time I realized this I'd already had a nice font picked out, so I just kept arranging and resizing until all the pieces were touching. I layered the pattern over two sheets of colored poster paper and began cutting with a carpet cutter/box cutter. 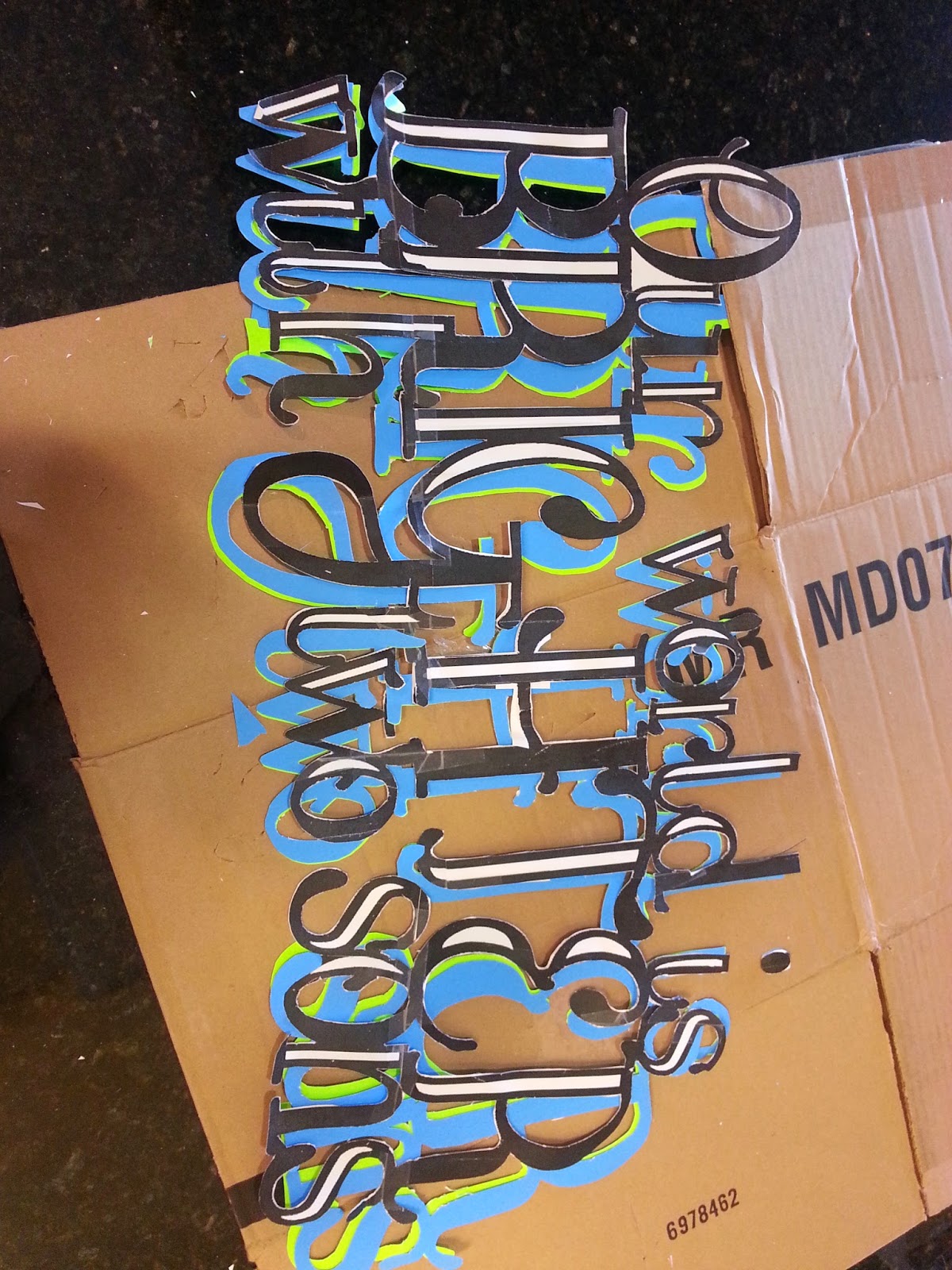 I started with small areas, trying to keep it from being too floppy until the very end. Here, all the pieces are cut out--except, can you spot my error? (I did not until after it was hung up!) 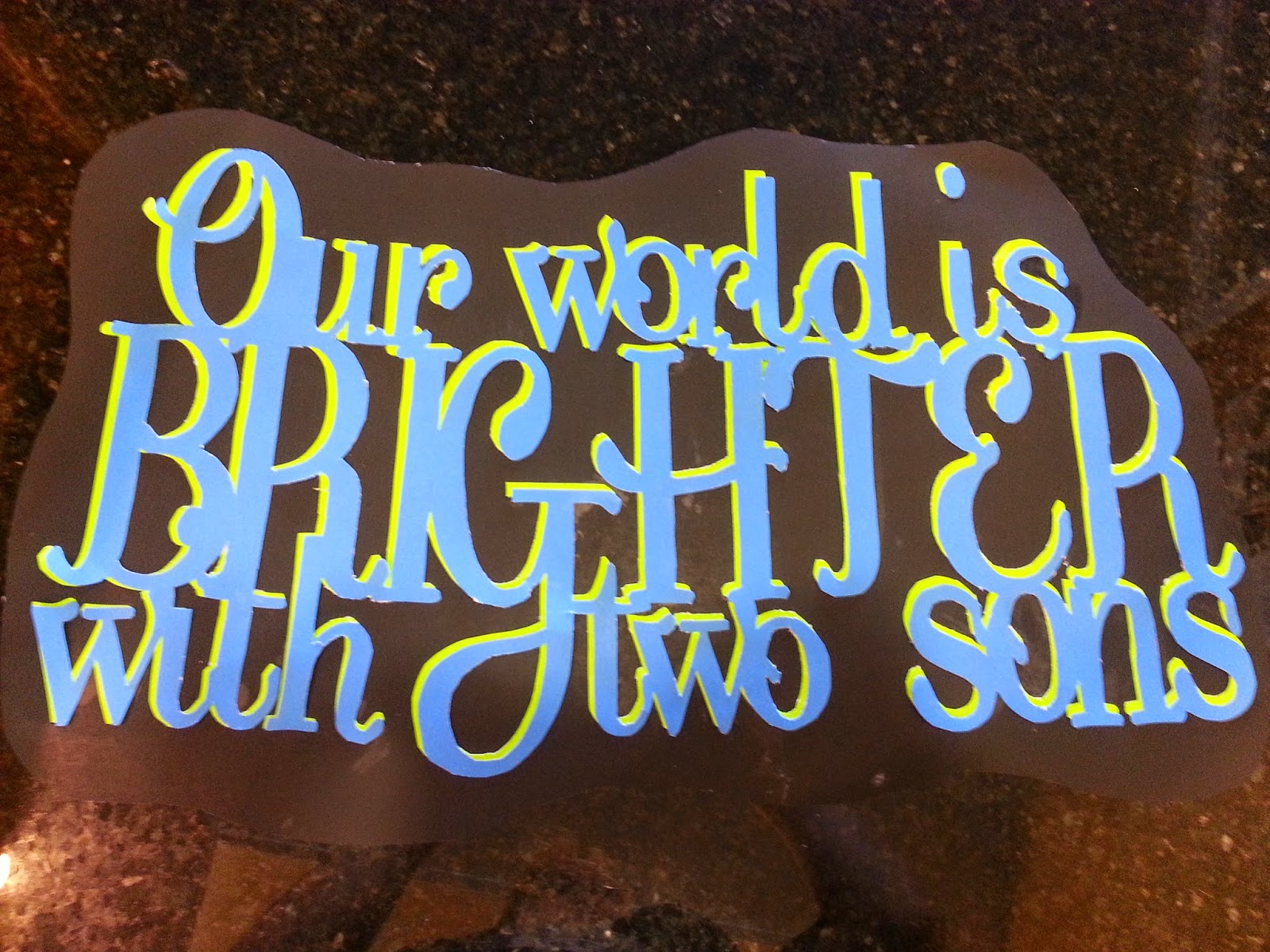 I glued it layer by layer on a black poster board background. 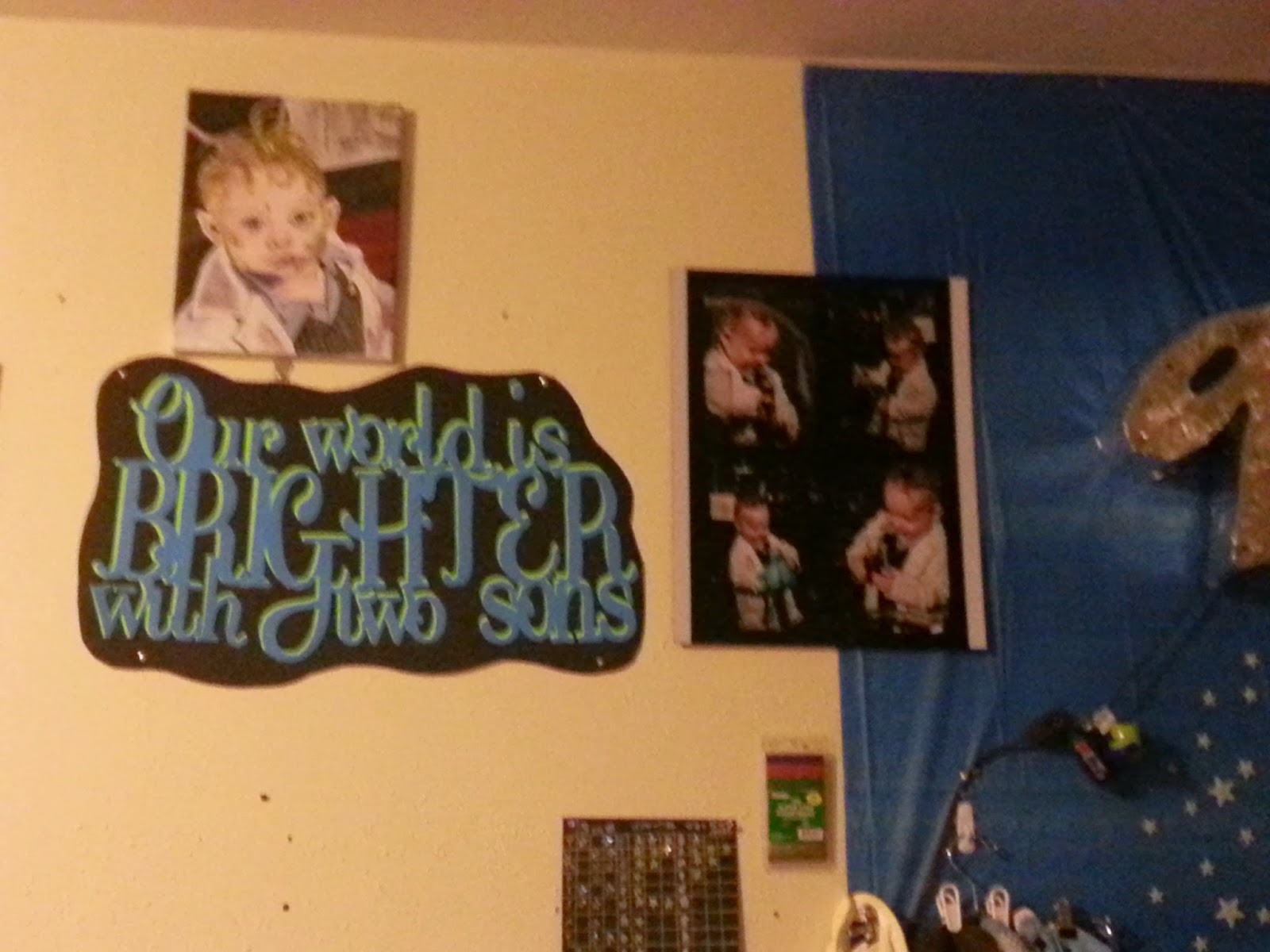 And hung it over our bed. This shot was taken before I extended the blue across that area, I think it looks better on blue than white.

This project was very very cheap-under $3 for the poster board, and glue I had on hand. However, it was far more time consuming than I expected!  I would say it took me a minimum of ten hours, spread out over several days. In the future, if painting on walls is a possibility, I would definitely go that route if I were to do something like this again.
Posted by Lady Covington at 10:04 PM